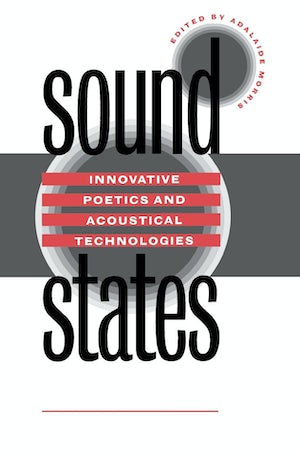 By investigating the relationship between acoustical technologies and twentieth-century experimental poetics, this collection, with an accompanying compact disc, aims to 'turn up the volume' on printed works and rethink the way we read, hear, and talk about literary texts composed after telephones, phonographs, radios, loudspeakers, microphones, and tape recorders became facts of everyday life.

Adalaide Morris is professor of English and chair of the English department at the University of Iowa.
For more information about Adalaide Morris, visit the Author Page.

"A first-rate contribution to the ongoing reformulation of our understanding of what literature means, or is becoming, in a world saturated by audio technology. From the enlightening introduction by Adalaide Morris to the extensive discography and bibliographies in the back, Sound States will undoubtedly spur productive debate and research."--Stanford Humanities Review

“This impressive collection of essays explores the specifically aural nature of modern and contemporary poetic works and practices. . . . The contributions are always intriguing . . . and benefit immensely from an accompanying compact disc.”--Virginia Quarterly Review

"Oyez--now hear this. A dynamic group of essays tuned in to the twangs and calibrations of poetic listening and fine-tuned to cultural studies of modernism, contemporaneity, and poetics. An original and innovative anthology by people thinking with an 'ear-mind.'"--Rachel Blau DuPlessis, poet and critic

"Sound States is an important, exciting, groundbreaking book. It restores the reading and, notably, the discussion of poetry to the sensed world, the world of affects, of play, of instability. In seeking to teach us how to hear, it changes the way we read and how we think about reading. It opens up a too-long-neglected aspect of the written word and reminds us of the sheer playfulness that informs and generates artistic work."--Peter Quartermain, University of British Columbia