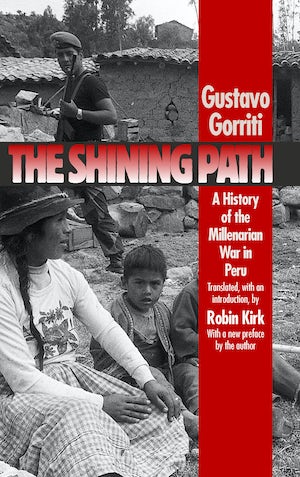 First published in Peru in 1990, The Shining Path was immediately hailed as one of the finest works on the insurgency that plagued that nation for over fifteen years. A richly detailed and absorbing account, it covers the dramatic years between the guerrillas' opening attack in 1980 and President Fernando Belaunde's reluctant decision to send in the military to contain the growing rebellion in late 1982. Covering the strategy, actions, successes, and setbacks of both the government and the rebels, the book shows how the tightly organized insurgency forced itself upon an unwilling society just after the transition from an authoritarian to a democratic regime.

One of Peru's most distinguished journalists, Gustavo Gorriti first covered the Shining Path movement for the leading Peruvian newsweekly, Caretas. Drawing on hundreds of interviews and an impressive array of government and Shining Path documents, he weaves his careful research into a vivid portrait of the now-jailed Shining Path leader Abimael Guzmán, Belaunde and his generals, and the unfolding drama of the fiercest war fought on Peruvian soil since the Chilean invasion a century before.

In addition to his work for Caretas, Gustavo Gorriti has been a frequent contributor to the New York Times, the New Republic, and the Los Angeles Times. Currently, he is deputy editor of Panama's La Prensa. Robin Kirk is author of The Monkey's Paw: New Chronicles from Peru and coeditor of The Peru Reader: History, Culture, Politics.
For more information about Gustavo Gorriti, visit the Author Page.

"Masterfully translated by Robin Kirk. . . . Gorriti skillfully relates the story of Sendero members, victims, and targets, weaving together a coherent description of the movement that challenged the survival of Peru as a nation."--Latin American Research Review

"Impeccably researched, rigorous in its analysis, and often elegant in its prose (as well as expertly translated by Robin Kirk), this important book is fundamental reading for those who wish to understand the Shining Path."--The Historian

"This important book . . . represents one of the most informative accounts of the first phase of the insurrection launched by the Partido Comunista del Perú - Sendero Luminoso."--Latin American Studies

"Rich in the detail of Peruvian political life, the description is so lively that even the nonspecialist will appreciate this work. Strongly recommended to general readers, Latin American and Peruvian specialists, and students of revolutionary strategy."--Choice

"Not the least important part of this remarkable book (originally published in Spanish in 1991) is its analysis of the turgid repetitions of the canonical texts of Marxism and, above all, Maoism, that were central to Sendero Luminoso. . . . Provides a brilliant indictment of the ineffective and corrupt police and intelligence services."--Times Literary Supplement

"Gorriti’s classic account of the Sendero Luminoso retains all its immediacy and explanatory power in this fine translation by Robin Kirk. . . . A fine introduction to one of Latin America’s most gruesome conflicts in years."--Foreign Affairs