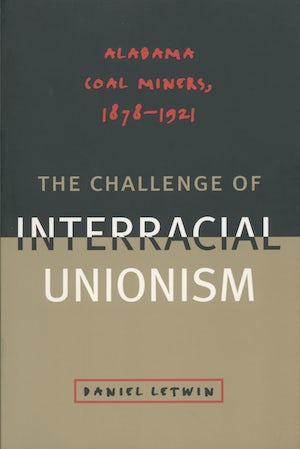 This study explores a tradition of interracial unionism that persisted in the coal fields of Alabama from the dawn of the New South through the turbulent era of World War I. Daniel Letwin focuses on the forces that prompted black and white miners to collaborate in the labor movement even as racial segregation divided them in nearly every other aspect of their lives.

Letwin examines a series of labor campaigns--conducted under the banners of the Greenback-Labor party, the Knights of Labor, and, most extensively, the United Mine Workers--whose interracial character came into growing conflict with the southern racial order. This tension gives rise to the book's central question: to what extent could the unifying potential of class withstand the divisive pressure of race?

Arguing that interracial unionism in the New South was much more complex and ambiguous than is generally recognized, Letwin offers a story of both promise and failure, as a movement crossing the color line alternately transcended and succumbed to the gathering hegemony of Jim Crow.

"Letwin successively examines the impact of the Greenback Labor Party, the Knights of Labor and the United Mine Workers of America as each fought against the power of the coal operators and in the process helped define race relations in the workplace. . . . This is a clear and well-written book which deserves to be on undergraduate reading lists as an example of how the new labour history handles the complex interrelationship between race and class."--Journal of American Studies

“A major book that analyzes the crucial themes of race and labor in the New South in considerable depth. . . . Letwin presents an intricate, multifaceted portrait of southern coal miners and their union. . . . A vital contribution to the ongoing debates on labor and race in American working class history, and in the UMWA more specifically.”--International Labor and Working Class History

“Letwin makes a compelling argument in an engaging writing style. He has done a good job of capturing the essence of coal mining as an occupation and the multiethnic as well as multiracial make-up of those who populated it. . . . Local studies like Letwin’s will continue to enrich and deepen our understanding of worker behavior in the union movement’s formative years.”--American Historical Review

“Letwin’s carefully crafted study of Alabama coal miners reminds us that organized labor had many options open to it even when it operated in the most forbidding of environments. His book adds significantly to a growing body of literature treating the enormously complex interplay of class and race in the making of the modern labor movement.”--Labor Studies Journal

“Demonstrates how black and white miners initiated certain class-based actions that cut across racial lines and counteracted the widespread image of a docile southern working class.”--Journal of Social History

“A first-rate book that will be a benchmark in the field for many years to come.”--The Journal of American History