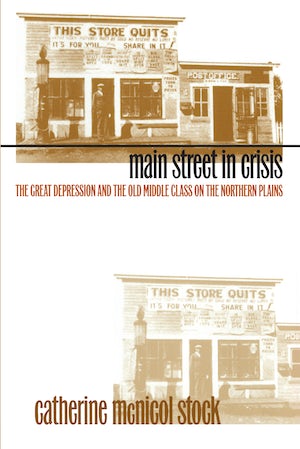 This study of class during the Great Depression is the first to examine a relatively neglected geographical area, the northern plains states of North and South Dakota, from a social and cultural perspective. Surveying the values and ideals of the old middle class -- independent shopkeepers, artisans, professionals, and farmers -- Catherine Stock presents a picture of Dakotans' cultural life in the 1920s and 1930s and tells of their efforts to come to terms with the enormous social change brought about by the New Deal.

According to Stock, the depression not only destroyed Dakotans' economic foundations but also bankrupted their community organizations and undermined theirsocial relations. She shows that Dakotans' social values, characterized by notions of neighborliness, loyalty, hard wok, upright character, and individual enterprise, were threatedened first by devastating drought and subsequent economic collapse and then by massive relief efforts and governmental intervention on an unprecedented scale. By 1940, one-third of all farmers who owned their land had lost it to foreclosure, and the federal government had spent nearly half a billion dollars to aid the region.

Stock argues that to Dakotans, the New Deal offered a trade-off between autonomy, community, and local control, on the one hand, and survival itself on the other. Dakotans, ambivalent toward "progress," feared not only for their land, their businesses, their families, and their communities; they feared for the survival of a way of life. They responded, says Stock, by working to make sense of the new world and find renewed meaning in the old.

Consulting varied sources such as diaries, autobiographies, oral histories, and newspaper accounts, Stock includes women's voices as well as men's. She integrates female perspectives on farm life and old-middle-class community into the narrative as a whole and devotes a separate chapter to women's experiences of the upheavals produced by the Great Depression and the New Deal.

“An outstanding book, one with implications that go far beyond its chronological and geographical borders.”--Canadian Review of American Studies

"[A] thoughtful, even wise, book. . . . Told in a skilled, suggestive narrative."--Journal of American History

"An outstanding work of scholarship that fills an important void in our understanding of the Depression decade in the Northern Plains. . . . Should be of interest to all scholars of the Depression and the Great Plains region."--Journal of the West

"This book deserves credit for the boldness of its vision, the audacity of its assertions, the imagination with which it searches out and uses evidence, and the creativity of its thematic organization. Farmers and small producers in the twentieth century have not received their historical due, and Catherine Stock's study should help right that imbalance."--South Dakota History

"Catherine Stock's book on the old middle class manages the unusual feat of treating with sympathy and respect the kind of people who usually serve merely as the target of sophisticated ridicule. Without minimizing their faults, she makes it clear that they stood for certain enduring values and, moreover, that their attitudes were not simple--that those attitudes, in fact, were full of ambivalence and contradiction."--Christopher Lasch, University of Rochester