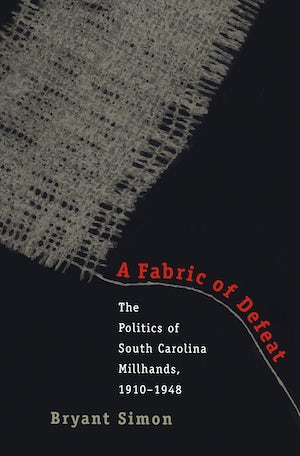 In this book, Bryant Simon brings to life the politics of white South Carolina millhands during the first half of the twentieth century. His revealing and moving account explores how this group of southern laborers thought about and participated in politics and public power.

Taking a broad view of politics, Simon looks at laborers as they engaged in political activity in many venues--at the polling station, on front porches, and on the shop floor--and examines their political involvement at the local, state, and national levels. He describes the campaign styles and rhetoric of such politicians as Coleman Blease and Olin Johnston (himself a former millhand), who eagerly sought the workers' votes. He draws a detailed picture of mill workers casting ballots, carrying placards, marching on the state capital, writing to lawmakers, and picketing factories. These millhands' politics reflected their public and private thoughts about whiteness and blackness,

war and the New Deal, democracy and justice, gender and sexuality, class relations and consumption.

Ultimately, the people depicted here are neither romanticized nor dismissed as the stereotypically racist and uneducated "rednecks" found in many accounts of southern politics. Southern workers understood the political and social forces that shaped their lives, argues Simon, and they developed

complex political strategies to deal with those forces.

Bryant Simon is assistant professor of history at the University of Georgia.
For more information about Bryant Simon, visit the Author Page.

"Perceptive in analysis and engaging in style, Bryant Simon's impressive volume provides a masterly investigation of the political life of white South Carolina millhands during the first half of the twentieth century. . . . This deeply researched and well-written volume stands as a rigorous study that fills a real need--a major exploration of the working class politics of southern millhands in the modern period. This is a significant effort."--Journal of Social History

"An interesting and valuable contribution to our understanding of twentieth-century white southern legal culture."--American Historical Review

"An excellent study of the politics of South Carolina textile workers, from the Progressive era through the New Deal and World War II. It is, first and foremost, an artful blending of the subfields of labor, political, and southern history, but the book will be of interest to political scientists and to students of cultural studies as well. Simon’s exploration of the limits of New Deal reform is superb, and his analysis of the multiple dimensions of millworkers’ identities is insightful, and often provocative."--Journal of Interdisciplinary History

"A significant addition to the new scholarship on southern working-class whites."--Journal of Southern History

"Represents essential reading for those who seek a deeper understanding of the American south’s tortured course in the twentieth century."--Business History