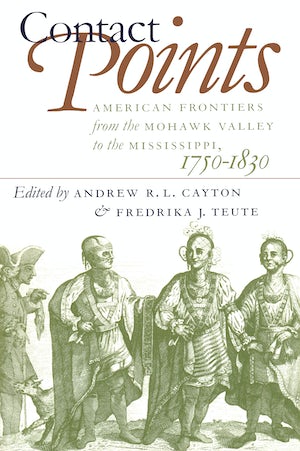 The eleven essays in this volume probe multicultural interactions between Indians, Europeans, and Africans in eastern North America's frontier zones from the late colonial era to the end of the early republic. Focusing on contact points between these groups, they construct frontiers as creative arenas that produced new forms of social and political organization.

Contributors to the volume offer fresh perspectives on a succession of frontier encounters from the era of the Seven Years' War in Pennsylvania, New York, and South Carolina to the Revolutionary period in the Ohio Valley to the Mississippi basin in the early national era. Drawing on ethnography, cultural and literary criticism, border studies, gender theory, and African American studies, they open new ways of looking at intercultural contact in creating American identities. Collectively, the essays in Contact Points challenge ideas of either acculturation or conquest, highlighting instead the complexity of various frontiers while demonstrating their formative influence in American history.

Fredrika J. Teute is editor of publications at the Omohundro Institute of Early American History and Culture in Williamsburg, Virginia.
For more information about Fredrika J. Teute, visit the Author Page.

"One of the best collections to date on the history of early American frontiers and Indian-white relations."--Wisconsin Magazine of History

"A major contribution to the historiography of early North America. Their theoretical insights will enrich cultural history in general and help conceptually remake the term 'frontier.'"--Journal of American History

"This is a must read for those with interests in new perspectives on Native cultures."--Journal of the West

"[An] excellent volume."--Journal of Southern History

"The essays provide a good example of the current scholarship on North American frontiers. The book would be an excellent addition to any course on western, early American, Native American, or ethnic history and should be an important voice in the continuing debates on the nature of the frontier(s) in North American history."--North Carolina Historical Review

"An impressive sampling of a fresh wave of scholarly investigation into the first transmontane expansion of American society."--Journal of the Early Republic