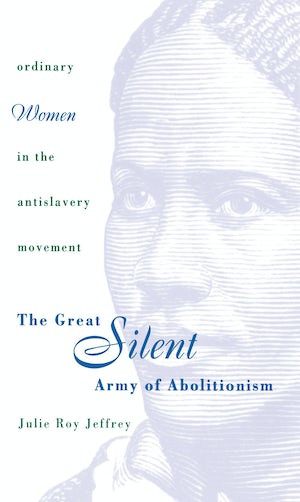 By focusing on male leaders of the abolitionist movement, historians have often overlooked the great grassroots army of women who also fought to eliminate slavery. Here, Julie Roy Jeffrey explores the involvement of ordinary women--black and white--in the most significant reform movement prior to the Civil War. She offers a complex and compelling portrait of antebellum women's activism, tracing its changing contours over time.

For more than three decades, women raised money, carried petitions, created propaganda, sponsored lecture series, circulated newspapers, supported third-party movements, became public lecturers, and assisted fugitive slaves. Indeed, Jeffrey says, theirs was the day-to-day work that helped to keep abolitionism alive. Drawing from letters, diaries, and institutional records, she uses the words of ordinary women to illuminate the meaning of abolitionism in their lives, the rewards and challenges that their commitment provided, and the anguished personal and public steps that abolitionism sometimes demanded they take. Whatever their position on women's rights, argues Jeffrey, their abolitionist activism was a radical step--one that challenged the political and social status quo as well as conventional gender norms.

"Provides a wealth of insights. . . . While Jeffrey's work has certainly not been the last word on female abolitionists, it has established itself as one of the first places to begin."--Historical Journal of Massachusetts

"Jeffery investigates the broader scope of the movement and brings antislavery into the realm of social history. . . . In the process, the book examines how abolitionism affected the lives of ordinary women and how women in turn influenced the abolitionist movement."--Journal of Southern History

"An outstanding and indispensable addition to the literature on American antislavery work. . . . A brilliant success. [Jeffrey] has recaptured the voices of hundreds of forgotten women, weaving their stories together in a moving and effective narrative that clearly establishes the centrality of women's work to the abolitionist movement. She has, in this way, left an enduring mark on all future study of the antislavery struggle."--The Historian

"Jeffrey's extensive research into the lives of ordinary women confirms much that has been said in shorter venues and adds intriguing new interpretations of its own as it broadens our considerations of abolition to include the articulate female majority in its rank and file. Useful to scholars, the book should also be accessible to advanced undergraduates because of its underlying chronological organization and brief summaries of important events in the history of abolition."--Journal of Southern History

"This fine, definitive, and exhaustively researched book locates women as central actors in the antislavery struggle, emphasizing how their efforts both transcended and transformed the parameters of the emergent public sphere."--Journal of American History

"A comprehensive study of women’s participation in the abolitionist movement from the 1830s through the Civil War. . . . [Jeffrey] presents a new way of framing female abolitionist activism. . . . An important book for historians of abolitionism in particular and nineteenth-century social reform movements in general, for it demonstrates that women were not peripheral to abolitionist men, despite the patriarchal structure of national and state antislavery organizations."--American Historical Review