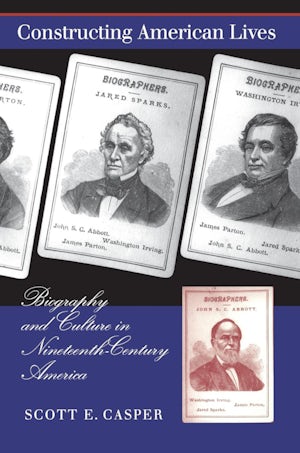 1999 SHARP Book Prize, Society for the History of Authorship, Reading, and Publishing

Nineteenth-century American authors, critics, and readers believed that biography had the power to shape individuals' characters and to help define the nation's identity. In an age predating radio and television, biography was not simply a genre of writing, says Scott Casper; it was the medium that allowed people to learn about public figures and peer into the lives of strangers. In this pioneering study, Casper examines how Americans wrote, published, and read biographies and how their conceptions of the genre changed over the course of a century.

Campaign biographies, memoirs of pious women, patriotic narratives of eminent statesmen, "mug books" that collected the lives of ordinary midwestern farmers--all were labeled "biography," however disparate their contents and the contexts of their creation, publication, and dissemination. Analyzing debates over how these diverse biographies should be written and read, Casper reveals larger disputes over the meaning of character, the definition of American history, and the place of American literary practices in a transatlantic world of letters. As much a personal experience as a literary genre, biography helped Americans imagine their own lives as well as the ones about which they wrote and read.

Scott E. Casper is associate professor of history at the University of Nevada, Reno.
For more information about Scott E. Casper, visit the Author Page.

"Casper's excellent Consturcting American Lives defines a new way of conceiving and writing literary history . . . . The analytic authority of Casper's book derives from the imaginativeness - and rigor - with which he executes his design. A body of striking archival material permits him to . . . offer a fascinating set of exemplary cases . . . . By exploring so lucidly the ideological questions posed by the new discipline of cultural studies and by performing so richly the traditional archival work of the historian, Casper achieves his ambitious goal."--Journal of Interdisciplinary History

"A sophisticated, ambitious, and rewarding treatise on how Americans wrote, published, and read biographies from 1790 to the turn of the twentieth century. . . . Casper’s ambition and accomplishment are clearly worthy of both our admiration and our applause. He has written a wonderful book that will surely become a standard work for everyone interested in the history of American biographical writing."--American Historical Review

"Casper has made a sweeping and encyclopedic survey of the cultural work of an important genre in the literary life of a pivotal century."--Reviews in American History

"An excellent study linking the biographical genre within the context of the 19th-century culture. . . . Caper’s engagingly written book is a welcome addition to the academic study of the subject."--Choice

"Scott Casper's Constructing American Lives is an important contribution to the understanding of a major genre of nineteenth-century American literature and historiography that has barely begun to be studied in a systematic way. This book is now the court of first resort."--Lawrence Buell, Harvard University