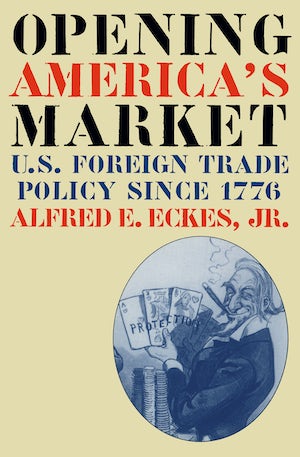 Despite the passage of NAFTA and other recent free trade victories in the United States, former U.S. trade official Alfred Eckes warns that these developments have a dark side. Opening America's Market offers a bold critique of U.S. trade policies over the last sixty years, placing them within a historical perspective.

Eckes reconsiders trade policy issues and events from Benjamin Franklin to Bill Clinton, attributing growing political unrest and economic insecurity in the 1990s to shortsighted policy decisions made in the generation after World War II. Eager to win the Cold War and promote the benefits of free trade, American officials generously opened the domestic market to imports but tolerated foreign discrimination against American goods. American consumers and corporations gained in the resulting global economy, but many low-skilled workers have become casualties.

Eckes also challenges criticisms of the 'infamous' protectionist Smoot-Hawley Tariff Act of 1930, which allegedly worsened the Great Depression and provoked foreign retaliation. In trade history, he says, this episode was merely a mole hill, not a mountain.

Alfred E. Eckes, Jr., a former chairman and commissioner of the U.S. International Trade Commission, is Ohio Eminent Research Professor in Contemporary History at Ohio University. His books include The United States and the Global Struggle for Minerals.
For more information about Alfred E. Eckes Jr., visit the Author Page.

"The book poses important issues about the relationships between policy and economic performance and areas deserving fuller study in terms of business-government relations. . . . [Eckes] study will be useful to business historians concerned with international trade business form 1945 to 1970 or the changing nature of the U.S. economy."--Business History

"A dispassionate, informed and accessible account of the history of United States trade policy that can help Americans evaluate the arguments of both free-traders and protectionists. . . . [Eckes] unites scholarly rigor with a policy maker's sensitivity to the political factors influencing trade. . . . One hopes that future historians will provide their readers with a perspective on the past as helpful as the one Mr. Eckes has given us."--New York Times Book Review (1995)

"A former trade official in the Bush and Reagan Administrations traces the history of American trade policy to help readers sort through the arguments of both free-traders and protectionists."--New York Times Book Review, New and Noteworthy Paperbacks (1998)

"[Eckes] has written a clear but controversial book on a very controversial topic. . . . This is a well-argued and amply documented work of historical scholarship and contemporary policy advocacy."--Choice

"An up-to-date history of U.S. trade policies, written by a historian, has long been sorely needed; Eckes fills the gap."--American Historical Review

"Should alert elites (historians included!) to the dangers of free-trade, market dogmatism to American economic vitality."--Journal of American History