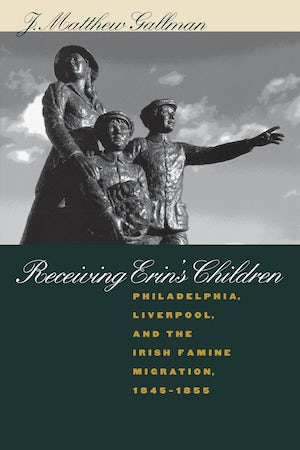 To purchase online via an independent bookstore, visit Bookshop.org
Between 1845 and 1855, 2 million Irish men and women fled their famine-ravaged homeland, many to settle in large British and American cities that were already wrestling with a complex array of urban problems. In this innovative work of comparative urban history, Matthew Gallman looks at how two cities, Philadelphia and Liverpool, met the challenges raised by the influx of immigrants.

Gallman examines how citizens and policymakers in Philadelphia and Liverpool dealt with such issues as poverty, disease, poor sanitation, crime, sectarian conflict, and juvenile delinquency. By considering how two cities of comparable population and dimensions responded to similar challenges, he sheds new light on familiar questions about distinctive national characteristics--without resorting to claims of "American exceptionalism." In this critical era of urban development, English and American cities often evolved in analogous ways, Gallman notes. But certain crucial differences--in location, material conditions, governmental structures, and voluntaristic traditions, for example--inspired varying approaches to urban problem solving on either side of the Atlantic.

"A book that makes a welcome contribution to our understanding of nineteenth-century urban history. . . . [A] valuable and important study."--Historian

"[This book] makes an important contribution to both immigration and urban history as well as to the history of public welfare. . . . Gallman's comparison of social policies and programs in Liverpool and Philadelphia is a greatly important tale of two cities to those who study immigration history, urban history, the history of poverty, and the history of public welfare. . . . [He] offer[s] a new way to evaluate and understand the responses of beleaguered municipalities on both sides of the ocean."--Reviews in American History

"This is a truly impressive study of comparative urban development. Matthew Gallman has used a rich body of sources to make an argument both careful and imaginative."--Roger Lane, Haverford College

"This is a truly comparative study that grapples with the meaning of the Irish famine migration in the context of American and English urban development and reform. As he illustrates how the Irish migration influenced urban politics and policies in Philadelphia and Liverpool, Gallman engages in a fascinating way with big questions of the national characters of the United States and Britain."--Jon Gjerde, University of California, Berkeley