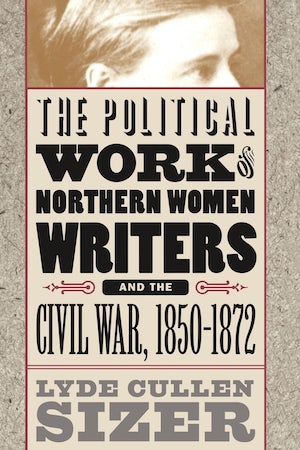 This volume explores the lives and works of nine Northern women who wrote during the Civil War period, examining the ways in which, through their writing, they engaged in the national debates of the time. Lyde Sizer shows that from the 1850 publication of Uncle Tom's Cabin through Reconstruction, these women, as well as a larger mosaic of lesser-known writers, used their mainstream writings publicly to make sense of war, womanhood, Union, slavery, republicanism, heroism, and death.

Sizer pays close attention to how these mostly middle-class women attempted to create a "rhetoric of unity," giving common purpose to women despite differences in class, race, and politics. This theme of unity was ultimately deployed to establish a white middle-class standard of womanhood, meant to exclude as well as include.

"Engaging and impressively researched. . . . Valuable: it situates some familiar and unfamiliar authors in an illuminating historical context, and it identifies productive areas for further study."--Journal of American History

"Sizer's book is a thorough study of female assertions of political power through written discourse. Her account is expansive and complex."--Journal of American Studies

"A thorough and nuanced exploration of these authors' wartime writing. It will be of interest to historians and literary critics alike."--American Historical Review

"In this impressively researched and clearly written study, Sizer analyzes the ways in which northern women writers used their writing . . . to respond to and potentially affect the public understanding of the national crisis of the Civil War . . . . The chief strength of Sizer's book is its detailed analysis of how one of the most cataclysmic events of American history affected the lives and careers of women writers as well as other American women."--American Studies

"Sizer's work will be of interest to those studying the northern intellectual response to antislavery reform; wartime politics; freedom and Reconstruction; race and class; and the late-nineteenth-century suffrage movement. This study also will prove useful to scholars of Sizer's chosen authors, both for detailed perspectives on their wartime literary production and for background on their writing and activism."--Journal of the Early Republic

"A far-reaching exploration of the social and political impact of women's writings before, during, and after the Civil War. . . . The first monograph specifically addressing the political contribution of the era's women writers."--Library Journal