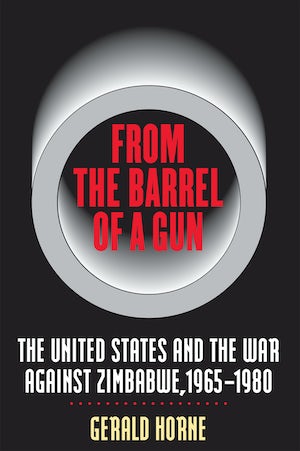 Across the Atlantic, President Lyndon B. Johnson nervously watched events in Rhodesia, fearing that racial conflict abroad could inflame racial discord at home. Although Washington officially voiced concerns over human rights violations, an attitude of tolerance generally marked U.S. relations with the Rhodesian government: sanctions were imposed but not strictly enforced, and hundreds, perhaps thousands, of American mercenaries joined white Rhodesia's side in battle with little to fear from U.S. laws. Despite such tacit U.S. support, Smith's regime fell in 1980, and the independent state of Zimbabwe was born.

The first comprehensive account of American involvement in the war against Zimbabwe, this compelling work also explores how our relationship with Rhodesia helped define interracial dynamics in the United States, and vice versa.

Gerald Horne teaches at the University of North Carolina at Chapel Hill. His books include Race Woman: The Lives of Shirley Graham Du Bois and Fire This Time: The Watts Uprising and the 1960s.
For more information about Gerald Horne, visit the Author Page.

"This book is an excellent reference tool."--Choice

"Horne's book is to be recommended, and should be required reading for those with an interest in U.S.-Zimbabwe relations, Pan-Africanism, and also the nationalist and post-nationalist historiography of Southern Africa."--H-Net

"In the tradition of Walter Rodney, Gerald Horne brilliantly writes black history in a comparative and Pan-African context. From the Barrel of a Gun provides the best historical study to date on the African struggle to overthrow the white minority rule in Zimbabwe. Horne convincingly documents the central role of the United States in delaying the decolonization of Zimbabwe. This is an impressive and comprehensive study of modern African political history."--Manning Marable, Columbia University

"This timely and brilliant contribution from Professor Horne breaks new ground in the depth and sophistication of its analysis. From the Barrel of a Gun takes the reader from the old American West to the last frontier of colonialism in Zimbabwe, viewing events through the lens of race, gender, and international intrigue."--Brenda Gayle Plummer, University of Wisconsin-Madison