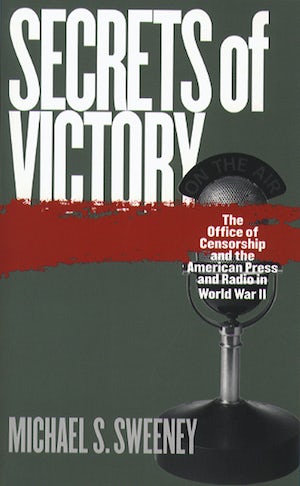 During World War II, the civilian Office of Censorship supervised a huge and surprisingly successful program of news management: the voluntary self-censorship of the American press. In January 1942, censorship codebooks were distributed to all American newspapers, magazines, and radio stations with the request that journalists adhere to the guidelines within. Remarkably, over the course of the war no print journalist, and only one radio journalist, ever deliberately violated the censorship code after having been made aware of it and understanding its intent.

Secrets of Victory examines the World War II censorship program and analyzes the reasons for its success. Using archival sources, including the Office of Censorship's own records, Michael Sweeney traces the development of news media censorship from a pressing necessity after the attack on Pearl Harbor to the centralized yet efficient bureaucracy that persuaded thousands of journalists to censor themselves for the sake of national security. At the heart of this often dramatic story is the Office of Censorship's director Byron Price. A former reporter himself, Price relied on cooperation with--rather than coercion of--American journalists in his fight to safeguard the nation's secrets.

"Will gladden the hearts of anyone interested in communication history during critical periods in the 20th century. . . . A balanced, well-written account of how governments can handle the difficult task of preserving press freedom in wartime without jeopardizing national security."--Political Communication

"A smart and necessary book. . . . Sweeney has managed an impressive balancing act, pouring exhaustively researched detail into a clean and engaging narrative; the result is one of those books you wish you could make people read."--Washington Post Book World

"An even-paced, exhaustively researched . . . text on a paradoxical period for American media."--Publishers Weekly

"This timely and important book about journalism, the media, and government control of information during wartime is highly recommended for academic and large public libraries."--Library Journal

"Adds deeper understanding about the way the world's leading democracy dealt with press censorship when it was brought into the war by the Japanese attack on Pearl Harbor. . . . A solid book that should be read by all students of press freedom and media history."--Journalism History

"A well-researched study of the U.S. office of censorship. . . . A well-written history of a rarely examined government agency that could have, but never did threaten, U.S. press freedom."--International Journal of History