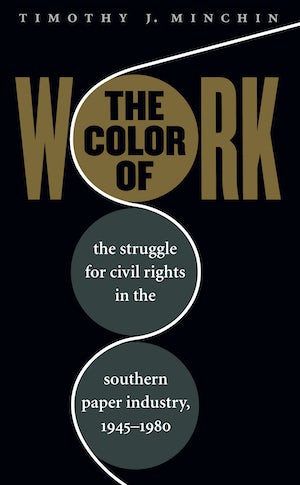 Histories of the civil rights movement have generally overlooked the battle to integrate the South's major industries. The paper industry, which has played an important role in the southern economy since the 1930s, has been particularly neglected. Using previously untapped legal records and oral history interviews, Timothy Minchin provides the first in-depth account of the struggle to integrate southern paper mills.

Minchin describes how jobs in the southern paper industry were strictly segregated prior to the 1960s, with black workers confined to low-paying, menial positions. All work literally had a color: every job was racially designated and workers were represented by segregated local unions. Though black workers tried to protest workplace inequities through their unions, their efforts were largely ineffective until passage of the 1964 Civil Rights Act opened the way for scores of antidiscrimination lawsuits. Even then, however, resistance from executives and white workers ensured that the fight to integrate the paper industry was a long and difficult one.

Timothy J. Minchin teaches American history at the University of St. Andrews in Scotland. He is author of What Do We Need a Union For?: The TWUA in the South, 1945-1955 and the award-winning Hiring the Black Worker: The Racial Integration of the Southern Textile Industry, 1960-1980.
For more information about Timothy J. Minchin, visit the Author Page.

"A welter of information and testimonies of how segregation was enforced in the paper mills, and how black workers and their local leaders took on such barriers and eventually triumphed. The book is sure to join other standard texts on how African-American workers challenged their second-class status in the workplace."--American Historical Review

"An important contribution to the growing body of literature examining the experiences of black workers in southern industries."--Choice

"[The Color of Work: The Struggle for Civil Rights in the Southern Paper Industry] deftly combines labor and civil rights history, showing the reader the close connections between the two. Deeply researched and clearly written, Minchin's study gives us a clearer appreciation for the color of work in the modern South."--Gulf South Historical Review

"Demonstrates the importance of federal intervention for ending segregation in southern industry."--Journal of American History

"The Color of Work never loses its focus on the southern paper mill. . . . Minchin's book invites other historians to follow his footsteps by tracing the desegregation of other southern industries. The Color of Work will set a high standard to meet when they do so."--Industrial and Labor Relations Review

"The Color of Work is a lucid, well-researched narrative that extends the history of the civil rights movement into the workplace in new and revealing ways. Minchin shows how the paper industry, one of the South's major industries, colluded with white-dominated unions to freeze unionized black workers in menial, low-paying positions for as long as twenty years after the Civil Rights Act of 1964 was enacted."--Thomas Terrill, University of South Carolina