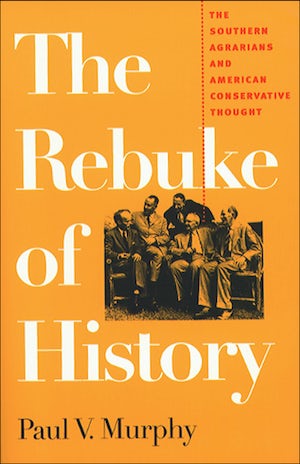 In 1930, a group of southern intellectuals led by John Crowe Ransom, Allen Tate, Donald Davidson, and Robert Penn Warren published I'll Take My Stand: The South and the Agrarian Tradition. A stark attack on industrial capitalism and a defiant celebration of southern culture, the book has raised the hackles of critics and provoked passionate defenses from southern loyalists ever since. As Paul Murphy shows, its effects on the evolution of American conservatism have been enduring as well.

Tracing the Agrarian tradition from its origins in the 1920s through the present day, Murphy shows how what began as a radical conservative movement eventually became, alternately, a critique of twentieth-century American liberalism, a defense of the Western tradition and Christian humanism, and a form of southern traditionalism--which could include a defense of racial segregation. Although Agrarianism failed as a practical reform movement, its intellectual influence was wide-ranging, Murphy says. This influence expanded as Ransom, Tate, and Warren gained reputations as leaders of the New Criticism. More notably, such "neo-Agrarians" as Richard M. Weaver and M. E. Bradford transformed Agrarianism into a form of social and moral traditionalism that has had a significant impact on the emerging conservative movement since World War II.

"Murphy has produced a magisterial work on the contributions of the Southern Agrarians to contemporary political thought. . . . Excellent for all levels and collections."--Choice

"Murphy's book will inspire some appreciation for the first generation of Agrarians. . . . This excellent book offers much from which to learn and much on which to reflect."--Journal of Southern History

"Murphy unravels the complex relationship between Agrarianism and conservatism. . . . [He] has opened a door into the southern and conservative psyche."--Southern Historian

"Paul Murphy's book is an admirably-crafted, intelligent, and informed work which is now the best account we have of the trajectory from I'll Take My Stand to the southern (and American) conservative tradition of today."--Michael O'Brien, Miami University