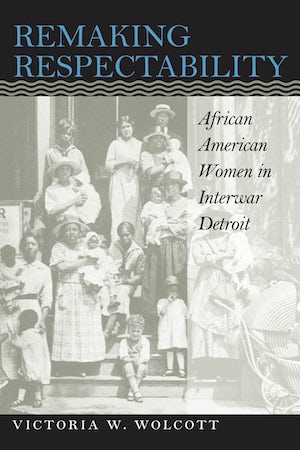 In the early decades of the twentieth century, tens of thousands of African Americans arrived at Detroit's Michigan Central Station, part of the Great Migration of blacks who left the South seeking improved economic and political conditions in the urban North. The most visible of these migrants have been the male industrial workers who labored on the city's automobile assembly lines. African American women have largely been absent from traditional narratives of the Great Migration because they were excluded from industrial work. By placing these women at the center of her study, Victoria Wolcott reveals their vital role in shaping life in interwar Detroit.

Wolcott takes us into the speakeasies, settlement houses, blues clubs, storefront churches, employment bureaus, and training centers of Prohibition- and depression-era Detroit. There, she explores the wide range of black women's experiences, focusing particularly on the interactions between working- and middle-class women. As Detroit's black population grew exponentially, women not only served as models of bourgeois respectability, but also began to reshape traditional standards of deportment in response to the new realities of their lives. In so doing, Wolcott says, they helped transform black politics and culture. Eventually, as the depression arrived, female respectability as a central symbol of reform was supplanted by a more strident working-class activism.

"A most welcome breakthrough in the historiography of black Detroit that has been dominated by a focus on black men as the central agents of community building."--Michigan Historical Review

"By focusing on the changing nature of their community work in the first three decades of the twentieth century, Wolcott adds significantly to our understanding not only of the history of African American women but also of the changing nature of black Detroit. All future work on either subject will need to take this book into account."--Anne Firor Scott, author of Natural Allies: Women's Associations in American History