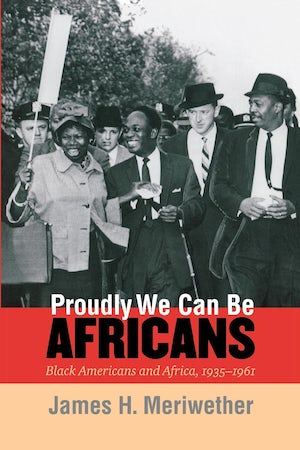 The mid-twentieth century witnessed nations across Africa fighting for their independence from colonial forces. By examining black Americans' attitudes toward and responses to these liberation struggles, James Meriwether probes the shifting meaning of Africa in the intellectual, political, and social lives of African Americans. Paying particular attention to such important figures and organizations as W. E. B. Du Bois, Martin Luther King Jr., and the NAACP, Meriwether incisively utilizes the black press, personal correspondence, and oral histories to render a remarkably nuanced and diverse portrait of African American opinion.

Meriwether builds the book around seminal episodes in modern African history, including nonviolent protests against apartheid in South Africa, the Mau Mau war in Kenya, Ghana's drive for independence under Kwame Nkrumah, and Patrice Lumumba's murder in the Congo. Viewing these events within the context of their own changing lives, especially in regard to the U.S. civil rights struggle, African Americans have continually reconsidered their relationship to contemporary Africa and vigorously debated how best to translate their concerns into action in the international arena.

Grounded in black Americans' encounters with Africa, this transnational history sits astride the leading issues of the twentieth century: race, civil rights, anticolonialism, and the intersections of domestic race relations and U.S. foreign relations.

"Meriwether's excellent book explores the meaning of Africa to black Americans. . . . Recommended for all levels and collections."--Choice

"A solid work that should foster a new understanding of the importance of Africa in the black American freedom struggle."--Journal of American History

"A work that endeavors--and largely succeeds--in doing full justice to the richness and diversity of African-American opinion during that crucial period encompassing the civil rights struggle at home and decolonization and 'national liberation' abroad."--American Historical Review

"[This] book is well written, well documented, and informative, and it makes a major contribution to the growing body of works on the historical connection between African Americans and Africa."--Journal of Southern History

"By examining the African American freedom struggle within the context of international developments, Meriwether is able to offer an alternative perspective on this history."--Journal of Contemporary History

"This beautifully written book provides a deeply textured narrative of the relationship between African Americans and Africa. James Meriwether has written a model transnational history, and has greatly furthered our understanding of the international character of American racial politics."--Mary L. Dudziak, University of Southern California Law School