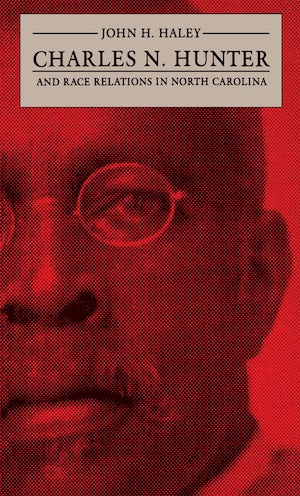 Charles N. Hunter, one of North Carolina's outstanding black reformers, was born a slave in Raleigh around 1851, and he lived there until his death in 1931. As public school teacher, journalist, and historian, Hunter devoted his long life to improving opportunities for blacks.

A political activist, but never a radical, he skillfully used his journalistic abilities and his personal contacts with whites to publicize the problems and progress of his race. He urged blacks to ally themselves with the best of the white leaders, and he constantly reminded whites that their treatment of his race ran counter to their professed religious beliefs and the basic tenets of the American liberal tradition. By carefully balancing his efforts, Hunter helped to establish a spirit of passive protest against racial injustice.

John Haley's compelling book, largely based on Hunter's voluminous papers, affords a unique opportunity to view race relations in North Carolina through the eyes of a black man. It also provides the first continuous survey of the black experience in the state from the end of the Civil War to the Great Depression, an account that critiques the belief that race relations were better in North Carolina than in other southern states.

John H. Haley is professor of history at the University of North Carolina at Wilmington.
For more information about John H. Haley, visit the Author Page.

"Charles N. Hunter was a real-life Miss Jane Pittman of the masculine persuasion, a man who witnessed the changes in race relations from emancipation to the middle of the Age of Segregation. Although a person of relative obscurity, he was active in public life and left a record from which John Haley has constructed a fascinating account of how one ordinary citizen managed to roll with the punch." --George B. Tindall, University of North Carolina at Chapel Hill