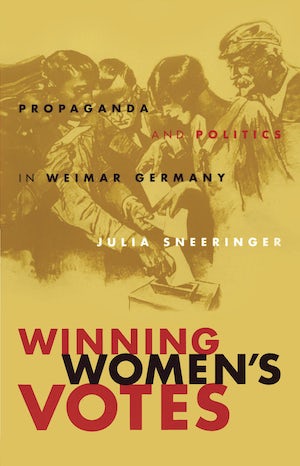 In November 1918, German women gained the right to vote, and female suffrage would forever change the landscape of German political life. Women now constituted the majority of voters, and political parties were forced to address them as political actors for the first time.

Analyzing written and visual propaganda aimed at, and frequently produced by, women across the political spectrum--including the Communists and Social Democrats; liberal, Catholic, and conservative parties; and the Nazis--Julia Sneeringer shows how various groups struggled to reconcile traditional assumptions about women's interests with the changing face of the family and female economic activity. Through propaganda, political parties addressed themes such as motherhood, fashion, religion, and abortion. But as Sneeringer demonstrates, their efforts to win women's votes by emphasizing "women's issues" had only limited success.

The debates about women in propaganda were symptomatic of larger anxieties that gripped Germany during this era of unrest, Sneeringer says. Though Weimar political culture was ahead of its time in forcing even the enemies of women's rights to concede a public role for women, this horizon of possibility narrowed sharply in the face of political instability, economic crises, and the growing specter of fascism.

"An insightful discussion of the mechanisms and limits of emancipation."--Choice

"Sneeringer has made a significant contribution to our understanding of the 'everyday language of politics' in Weimar Germany while also placing women firmly in the centre of German political history."--German History

"By focusing on how the political parties of Weimar Germany appealed to women and sought to mobilize the women's vote, Sneeringer's book makes a significant and lasting contribution to the existing body of secondary literature on Weimar electoral politics. Sneeringer's central thesis is that the parties of the Weimar Republic addressed women as a coherent interest group in the same way that they appealed to civil servants, white-collar employees, farmers, and youth. Through an exhaustive examination of published and unpublished materials on the place of women and women's issues in the various political parties from the Communists to the National Socialists, Sneeringer not only offers a much-needed corrective to the gender-neutral bias of the existing literature on Weimar electoral politics but also shows how the analysis of language and linguistic discourse can be used to augment more traditional approaches to the study of voter behavior."--Larry Eugene Jones, Canisius College