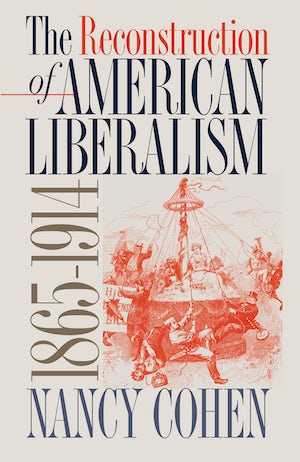 Tracing the transformation of liberal political ideology from the end of the Civil War to the early twentieth century, Nancy Cohen offers a new interpretation of the origins and character of modern liberalism. She argues that the values and programs associated with modern liberalism were formulated not during the Progressive Era, as most accounts maintain, but earlier, in the very different social context of the Gilded Age.

Integrating intellectual, social, cultural, and economic history, Cohen argues that the reconstruction of liberalism hinged on the reaction of postbellum liberals to social and labor unrest. As new social movements of workers and farmers arose and phrased their protests in the rhetoric of democratic producerism, liberals retreated from earlier commitments to an expansive vision of democracy. Redefining liberal ideas about citizenship and the state, says Cohen, they played a critical role in legitimating emergent corporate capitalism and politically insulating it from democratic challenge.

As the social cost of economic globalization comes under international critical scrutiny, this book revisits the bitter struggles over the relationship between capitalism and democracy in post-Civil War America. The resolution of this problem offered by the new liberalism deeply influenced the progressives and has left an enduring legacy for twentieth-century American politics, Cohen argues.

Nancy L. Cohen is a historian and the author of four books, including Breakthrough: The Making of America's First Woman President and Delirium: The Politics of Sex in America. Her articles and commentary have been published in the Washington Post, the Los Angeles Times, and the Guardian, among many others, and she has appeared on MSNBC, NPR, and many other broadcasts. She speaks frequently at conferences, universities, and book festivals across the nation. Currently, Cohen works as a consultant to political officials and nonprofits on gender policy and women’s leadership. She previously spent more than ten years in research and teaching positions at UCLA, Occidental College, and other universities. She lives in Los Angeles.
For more information about Nancy Cohen, visit the Author Page.

"Nancy Cohen demonstrates that a highly educated and close-knit community of eminent writers elaborated laissez-faire liberalism during Reconstruction in a quest to restrain the power of propertyless majorities and that their assumptions and anxieties were not discarded by the subsequent generation of liberal reformers, but rather provided intellectual boundaries to Progressive responses to the consolidation of corporate enterprise and the distempers of urban life. Although much has been written about political liberalism, this perceptive, original, and persuasive reinterpretation stands out as one that every future student of the half-century following the Civil War must take into account."--David Montgomery, author of The Fall of the House of Labor: The Workplace, the State, and American Labor Activism, 1865-1925

"An engaging introduction to the political ideas that have helped define the modern U.S."--Choice

"A complex and beautifully argued book."--Australasian Journal of American Studies

"The history of liberalism never was that simple, of course, a point that many historians have addressed and circled without necessarily landing squarely upon it. Nancy Cohen has dared to try, and the result is enthralling. . . . Cohen does a lot of subjects justice, covering a lot of ground in limited space and leaving the reader hankering for more. . . . [Cohen] has done a prodigious amount of research and produced a vital and readable work for students and scholars of political, constitutional, and intellectual history in the late nineteenth- and early twentieth-centuries."--Law and History Review

"This ambitious study adds a new dimension to a revision in the historical analysis of American progressivism that began with the discovery of corporate liberalism. . . . The challenge [this book] offers to earlier narratives of new liberalism bears serious consideration by all those interested in the distinctive character of U.S. liberalism."--Journal of American History

"Our understanding of the intellectual origins of Progressivism, and therefore of the paths taken by American liberalism in the twentieth century, will be greatly deepened by the powerful case Nancy Cohen has made regarding the character and importance of their nineteenth-century antecedents. Her work serves to confirm and extend historians' growing awareness of just how rich in ideas, and how crucial to the nation's future, were those oft-neglected three decades after the Civil War."--Wilfred M. McClay, author of The Masterless: Self and Society in Modern America