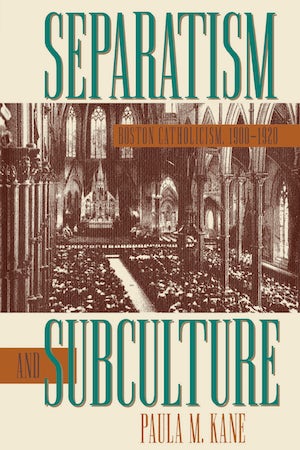 To purchase online via an independent bookstore, visit Bookshop.org
Kane explores the role of religious identity in Boston in the years 1900-1920, arguing that Catholicism was a central integrating force among different class and ethnic groups. She traces the effect of changing class status on religious identity and solidarity, and she delineates the social and cultural meaning of Catholicism in a city where Yankee Protestant nativism persisted even as its hegemony was in decline.

Paula M. Kane is associate professor of religious studies and the Marous Chair of Catholic Studies at the University of Pittsburgh.
For more information about Paula M. Kane, visit the Author Page.

"A richly contextualized and very readable analysis of the different voices in which Boston Catholics spoke during the Progressive Era. . . . This lively study raises new and important questions for students and scholars in American social and religious history, as well as for specialists in women's studies and gender studies."--Choice

"Kane's focus is the harbinger of a new look on the Catholic community, one that will require the rewriting of much of Catholic history in Boston and elsewhere. . . . It makes a worthwhile contribution to the growing library on the Catholic church in the Bay State."--American Historical Review

"[Kane's] strength is her impressive understanding of the blending of women's, community and labor groups. The book is a model for understanding the complex interdependence of religion, politics and society in other communities."--Christian Century

"[A] thorough and subtly argued book."--Journal of Social History

"In showing how Boston's Catholic elite pursued a strategy of 'separatist integration' designed to sustain the religious identity of their constituents even as they explored the borders of the Protestant-secular city, Paula Kane has provided one of the best studies of the defining cultural struggle Catholics have endured on two fronts in twentieth-century America."--James T. Fisher, Yale University