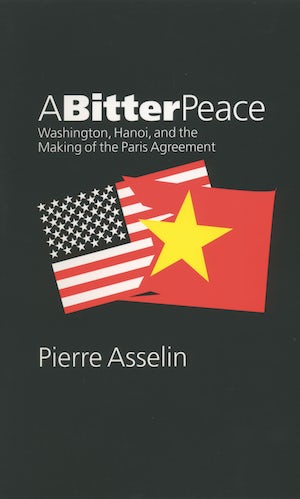 Demonstrating the centrality of diplomacy in the Vietnam War, Pierre Asselin traces the secret negotiations that led up to the Paris Agreement of 1973, which ended America's involvement but failed to bring peace in Vietnam. Because the two sides signed the agreement under duress, he argues, the peace it promised was doomed to unravel.

By January of 1973, the continuing military stalemate and mounting difficulties on the domestic front forced both Washington and Hanoi to conclude that signing a vague and largely unworkable peace agreement was the most expedient way to achieve their most pressing objectives. For Washington, those objectives included the release of American prisoners, military withdrawal without formal capitulation, and preservation of American credibility in the Cold War. Hanoi, on the other hand, sought to secure the removal of American forces, protect the socialist revolution in the North, and improve the prospects for reunification with the South. Using newly available archival sources from Vietnam, the United States, and Canada, Asselin reconstructs the secret negotiations, highlighting the creative roles of Hanoi, the National Liberation Front, and Saigon in constructing the final settlement.

Pierre Asselin is associate professor of history at Chaminade University of Honolulu.
For more information about Pierre Asselin, visit the Author Page.

"This is an impressive work of diplomatic history and an important contribution to the growing body of 'new Cold War history.'"--Virginia Quarterly Review

"As good an account of the 1972 negotiations and the resulting agreement as we are likely to get."--American Historical Review

"A well-researched, beginning work of scholarship that should be read by all interested in the Vietnam War."--Journal of American History

"Asselin is a part of a new generation of Vietnam scholars who are defying the academic taboo against addressing the torturous war period from perspectives both north and south of the seventeenth parallel. . . . Asselin's work will undoubtedly advance the discussion on the Vietnamese-American War enormously. A Bitter Peace is an excellent contribution to the literature that will hopefully encourage present and future scholars of Vietnam to finally address issues of that most taboo war."--Journal of Asian Studies

"A Bitter Peace is a welcome addition to the burgeoning literature on the last stages of the Vietnam War."--International History Review

"Making use of extraordinary new documents from archives in the United States and Vietnam, Pierre Asselin makes an important contribution in helping us understand what happened in the secret 'Nobel Prize-winning' negotiations between Le Duc Tho and Henry Kissinger. Two years later South Vietnam no longer existed. Asselin makes a powerful case that the outcome of the war was determined not on the battlefield, but at the negotiating table."--Larry Berman, author of No Peace, No Honor: Nixon, Kissinger, and Betrayal in Vietnam