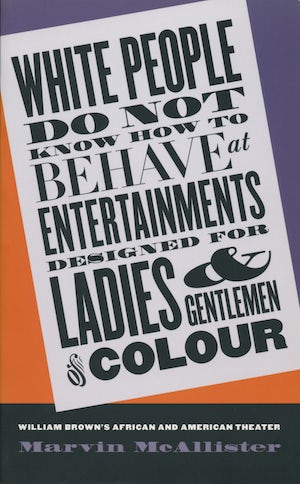 A Black Issues Remarkable Book of 2003

In August 1821, William Brown, a free man of color and a retired ship's steward, opened a pleasure garden on Manhattan's West Side. It catered to black New Yorkers, who were barred admittance to whites-only venues offering drama, music, and refreshment. Over the following two years, Brown expanded his enterprises, founding a series of theaters that featured African Americans playing a range of roles unprecedented on the American stage and that drew increasingly integrated audiences.

Marvin McAllister explores Brown's pioneering career and reveals how each of Brown's ventures--the African Grove, the Minor Theatre, the American Theatre, and the African Company--explicitly cultivated an intercultural, multiracial environment. He also investigates the negative white reactions, verbal and physical, that led to Brown's managerial retirement in 1823.

Brown left his mark on American theater by shaping the careers of his performers and creating new genres of performance. Beyond that legacy, says McAllister, this nearly forgotten theatrical innovator offered a blueprint for a truly inclusive national theater.

Marvin McAllister is theatre arts lecturer at Howard University and Literary Manager at the Shakespeare Theatre.


For more information about Marvin McAllister, visit the Author Page.

"A surprisingly thoughtful book. It is a comprehensive study that takes us to the epicenter of African-American theatre."--American Theatre

"McAllister has presented a provocative interpretation of Brown's theater management career. He has taken what seems to be fragmentary historical evidence and has woven it together within an interpretive framework of cultural, literary, performance, and at times, feminist theory. . . . [He] has opened the door for others with an interest in the shaping of American cultural and racial identity."--Journal of African American History

"Every now and then, scholars set out to do more than they should--and succeed. . . . [An] important institutional moment in the history of American performance."--Journal of American History

"A book that offers the most comprehensive and detailed history to date of William Brown's attempts to establish a commercial theater for African American actors in the early nineteenth century."--American Literature

"McAllister's book is the first to give Brown and the African Grove Company the in-depth, critical investigation that this much noted period in African American theater history has so sorely needed for so long. While others have cited Brown as a pioneer, McAllister provides him and his theatrical endeavors with more body and substance in an insightful work that is thoroughly researched and richly detailed. McAllister provocatively and effectively argues that Brown's African Company was not only a groundbreaking moment in black theater but an early adventure in diversity that embraced this country's multiethnic potential and as such was a truly American theater. Bold and engaging, this important book fills a void in American theater history."--Harry Elam, Stanford University 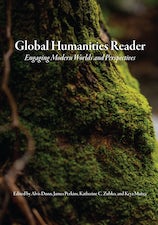