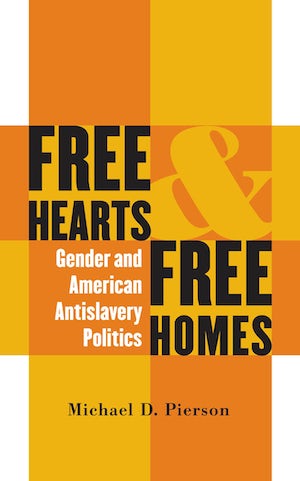 By exploring the intersection of gender and politics in the antebellum North, Michael Pierson examines how antislavery political parties capitalized on the emerging family practices and ideologies that accompanied the market revolution.

From the birth of the Liberty party in 1840 through the election of Republican Abraham Lincoln in 1860, antislavery parties celebrated the social practices of modernizing northern families. In an era of social transformations, they attacked their Democratic foes as defenders of an older, less egalitarian patriarchal world. In ways rarely before seen in American politics, Pierson says, antebellum voters could choose between parties that articulated different visions of proper family life and gender roles.

By exploring the ways John and Jessie Benton Frémont and Abraham and Mary Todd Lincoln were presented to voters as prospective First Families, and by examining the writings of Harriet Beecher Stowe, Lydia Maria Child, and other antislavery women, Free Hearts and Free Homes rediscovers how crucial gender ideologies were to American politics on the eve of the Civil War.

"Pierson's marvelous analysis of [the 1856 and 1860 presidential campaigns] is a real strength of his study. . . . A valuable contribution to our understandings of the relationship among abolitionism, gender reform, and the cultural and political debates that underpinned the Civil War."--American Historical Review

"Pierson's argument that political affiliation was not only based on ethnic and religious beliefs but also on conceptions of family and gender is a very important one. This book will interest those who are interested in antebellum America as well as those who are seeking new ways of thinking about politics and party loyalty."--Julie Roy Jeffrey, Goucher College

"Pierson's book is an important addition to this growing literature [of women in party politics]."--Journal of Illinois History

"By examining how gender influenced political style, rhetoric, and partisan appeal, Michael Pierson also helps to contextualize the ongoing conflicts over family, marriage, and gender that shape American democracy to the present day."--H-SHEAR