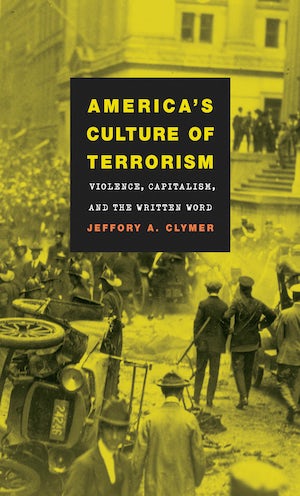 Although the terrorist attacks of 11 September 2001 shocked the world, America has confronted terrorism at home for well over a century. With the invention of dynamite in 1866, Americans began to worry about anonymous acts of mass violence in a way that differed from previous generations' fears of urban riots, slave uprisings, and mob violence. Focusing on the volatile period between the 1886 Haymarket bombing and the 1920 bombing outside J. P. Morgan's Wall Street office, Jeffory Clymer argues that economic and cultural displacements caused by the expansion of industrial capitalism directly influenced evolving ideas about terrorism.

In America's Culture of Terrorism, Clymer uncovers the roots of American terrorism and its impact on American identity by exploring the literary works of Henry James, Ida B. Wells, Jack London, Thomas Dixon, and Covington Hall, as well as trial transcripts, media reports, and the cultural rhetoric surrounding terrorist acts of the day. He demonstrates that the rise of mass media and the pressures of the industrial wage-labor economy both fueled the development of terrorism and shaped society's response to it. His analysis not only sheds new light on American literature and culture a century ago but also offers insights into the contemporary understanding of terrorism.

"America's Culture of Terrorism is a tightly focused work of literary and cultural history."--American Literature

"A complex and beautifully argued book."--Australasian Journal of American Studies

"From the Haymarket Square explosion in 1886 to the almost-forgotten bombing of Wall Street in 1920, Jeffory Clymer reminds us of two critical aspects of American society in the era of industrial capitalism: first, that acts of terrorism have been committed on American soil ever since the invention of dynamite, and second, that Americans have somehow managed to forget this fact again and again. In this respect, nothing has changed since September 11, 2001--except that Clymer's argument has become still more urgent and more necessary. Charting the strange career of American terrorism through the nineteenth-century 'propagandists of the deed' through the works of Henry James, Jack London, Thomas Dixon, and poets of WWI, America's Culture of Terrorism is an original, surprising, and enlightening book."--Michael Bérubé, Pennsylvania State University