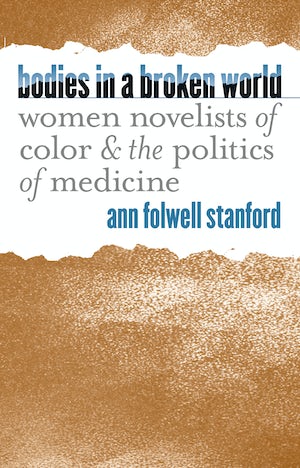 In this multidisciplinary study, Ann Folwell Stanford reads literature written by U.S. women of color to propose a rethinking of modern medical practice, arguing that personal health and social justice are inextricably linked. Drawing on feminist ethics to explore the work of eleven novelists, Stanford challenges medicine to position itself more deeply within the communities it serves, especially the poor and marginalized. However, she also argues that medicine must recognize its limits and join forces with the nonmedical community in the struggle for social justice.

In literary representations of physical and emotional states of illness and health, Stanford identifies issues related to public health, medical ethics, institutionalized racism, women's health, domestic abuse, and social justice that are important to discussions about how to improve health and health care. She argues that in either direct or indirect ways, the eleven novelists considered here push us to see health not only as an individual condition but also as a complex network of individual, institutional, and social changes in which wellness can be a possibility for the majority rather than a privileged few.

"Adds a unique approach to the historical perspective of the image and interpretations of minorities in the world of health care. . . . Subtle yet powerful."--Nursing History Review

"Stanford's thought-provoking analysis not only illuminates the importance of understanding sickness and health in the individual's social, political, and historical context, but also provides a springboard for ways we might collectively re-envision and transform medical practice in society."--Melus

"Challenging us to think of illness and healing as 'something we are all responsible for,' Stanford revitalizes the medical humanities through her engaged reading of fiction, a form of knowledge often ignored in the assumption that only scientific facts count. Rather than limiting literature to the role of reverent mirror to medicine, this passionate book reads novels by women of color not only for their rich themes, but for their analysis, critique, and strategies for renewal of a medicine now broadly understood as a set of practices forged in relation to social, cultural, and political institutions."--Susan Squier, Pennsylvania State University