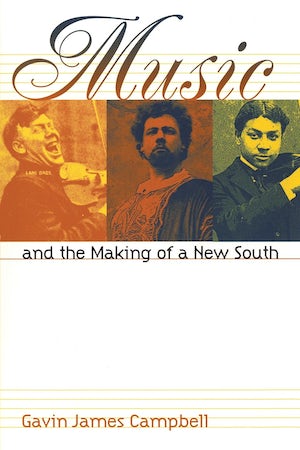 Startled by rapid social changes at the turn of the twentieth century, citizens of Atlanta wrestled with fears about the future of race relations, the shape of gender roles, the impact of social class, and the meaning of regional identity in a New South. Gavin James Campbell demonstrates how these anxieties were played out in Atlanta's popular musical entertainment.

Examining the period from 1890 to 1925, Campbell focuses on three popular musical institutions: the New York Metropolitan Opera (which visited Atlanta each year), the Colored Music Festival, and the Georgia Old-Time Fiddlers' Convention. White and black audiences charged these events with deep significance, Campbell argues, turning an evening's entertainment into a struggle between rival claimants for the New South's soul. Opera, spirituals, and fiddling became popular not just because they were entertaining, but also because audiences found them flexible enough to accommodate a variety of competing responses to the challenges of making a New South.

Campbell shows how attempts to inscribe music with a single, public, fixed meaning were connected to much larger struggles over the distribution of social, political, cultural, and economic power. Attitudes about music extended beyond the concert hall to simultaneously enrich and impoverish both the region and the nation that these New Southerners struggled to create.

Gavin James Campbell is associate professor at the Graduate School of American Studies at Doshisha University in Kyoto, Japan. The dissertation on which this book is based was awarded the St. George Tucker Society Dissertation Prize.
For more information about Gavin James Campbell, visit the Author Page.

"Campbell's writing is colorful and light on jargon. . . . Stunningly thorough and quite entertaining. . . . Being easy to read and not very long, it would make a nice entry in course syllabi. Other scholars studying how the tensions that Campbell explores for Atlanta were worked out elsewhere will find this book to be a ready partner."--Journal of American Folklore

“Campbell’s writing is colorful. . . . Stunningly thorough and quite entertaining.”--Journal of American Folklore

"A lively and astute exploration of how southerners coped with fundamental tensions and how even their musical 'diversions' were fraught with meaning."--Journal of Southern History

"Written with flair, as well as scholarly insight, Campbell's narrative is admirably composed and should inspire further reflection on the ways that music, and culture, organize identity."--American Historical Review