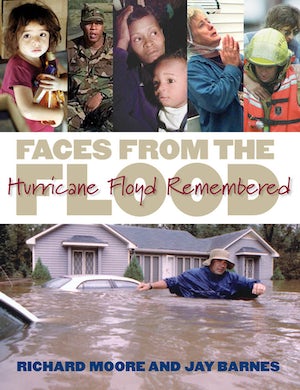 On September 16, 1999, rainfall from Hurricane Floyd swelled North Carolina's rivers, flooding tens of thousands of homes, businesses, and communities across the eastern third of the state; taking 52 lives; and causing an estimated $6 billion in damages. Faces from the Flood is a compelling look back at the state's most destructive natural disaster, conveyed through the words of those who endured it.

Thirty-seven interviews with victims, heroes, volunteers, scientists, and government officials offer tales of dramatic rescues, sorrowful losses, and the quiet determination to survive and rebuild. The story of Floyd is far from over, and North Carolinians must be prepared to face similar storms in the future, warn Richard Moore and Jay Barnes. They conclude with an assessment of the state's response to Floyd and a discussion of what programs should be initiated, maintained, or strengthened to prepare for future storms.

Through evocative personal stories, maps, tables, and dozens of striking photographs, Faces from the Flood highlights the dramatic impact of Hurricane Floyd. It will serve as a valuable reference for future explorations of North Carolina's greatest disaster.

Richard Moore was state treasurer of North Carolina from 2001 to 2009. From 1995 to 1999, he was the state's secretary of crime control and public safety, heading the Division of Emergency Management, the N.C. National Guard, the Highway Patrol, and other public safety agencies.
For more information about Richard Moore, visit the Author Page.

Jay Barnes is director of development for the North Carolina Aquarium Society. He has worked with the Aquariums since 1980, and he was director of the Aquarium at Pine Knoll Shores for more than twenty years. He is author of several books and articles on hurricanes, including North Carolina's Hurricane History (UNC Press), now in its third edition, and Florida's Hurricane History (UNC Press), now in its second edition.
For more information about Jay Barnes, visit the Author Page.

"Reading about everyday heroes and the fine people who came to the aid of so many is inspiring. . . . The book reminds me that we can count on our neighbors in times of trouble, a welcome message in the 21st century."--Our State

"The editors generously illustrate the narratives with fifty-three photographs capturing the pathos, fear, generosity, and courage that accompanied Floyd and its aftermath, and many of these images are riveting. . . . Memorable and valuable."--North Carolina Historical Review

"[The authors] have done an amazing job presenting three-dozen firsthand reports from victims, volunteers, scientists, heroes, and government officials. It is a riveting account of destruction, hope, and never giving up."--Kliatt

"Faces from the Flood rates an A+ from this career weather enthusiast. It provides excellent accounts of the years leading to the landfall of Hurricane Floyd and the giant magnitude of the meteorological flood event the storm caused in North Carolina. The personal stories of individuals caught in Floyd's wake are unique and captivating. They can only be known by talking to the individuals interviewed in this book or by reading this book. To not know of these stories is to not understand the personal tragedy inflicted by a flooding hurricane."--Steve Lyons, The Weather Channel