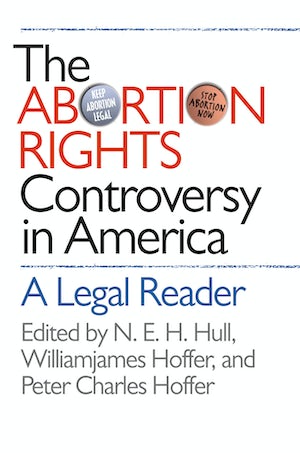 Beginning with the introduction of abortion law in the nineteenth century, this reader includes important documents from nearly two hundred years of debate over abortion. These legal briefs, oral arguments, court opinions, newspaper reports, opinion pieces, and contemporary essays are introduced with headnotes that place them in historical context. Chapters cover the birth control movement, changes in abortion law in the 1960s, Roe v. Wade, the Hyde Amendment and the Freedom of Access to Clinic Entrances Act, state and federal regulation of abortion practices, and the freedom of speech cases surrounding anti-abortion clinic protests. The first section of each chapter sets the stage and explains the choice of documents.

This rich, balanced collection is an indispensable reference tool for the study of one of the most passionate debates in American history. It brings together the writings of doctors, lawyers, scientists, philosophers, elected officials, judges, and scholars as few other legal readers do, and it is essential reading for those engaged in the ongoing debate about abortion law in the United States.

"Easily accessible and poignant without simplifying."--Law and History Review

"The collection is ideologically balanced, and will be a useful reference for students and scholars interested in issues involving reproductive freedom."--Choice

"This volume is a terrific resource. The editors provide researchers, instructors, and students of the abortion issue a wealth of primary source documents that bring the abortion debate to life in an easy-to-understand, chronological manner."--Karen O'Connor, American University

"The work provides a superlative roadmap for advanced undergraduate and graduate students approaching the issue for the first time, and it is a valuable reference for more experienced scholars. . . . The Abortion Rights Controversy in America is an essential resource for anyone seeking to understand the legal ramifications of the abortion issue."--Perspectives on Political Science

"[The Abortion Rights Controversy in America: A Legal Reader] provides a rich collection that will be well received by legal historians, professors who teach in the area of women and law, and undergraduate students and general readers who are interested in the history of abortion rights."--Law and Politics Book Review

"This rich analysis may provoke the smugly confident in both the pro-life and pro-choice camps, but Hull, Hoffer, and Hoffer's attempt at an even-handed explanation of how and why abortion became the lightning rod of modern American politics and constitutional debate will well serve citizens struggling to define the rights of the living and the unborn in the early twenty-first century. They have given us the most up-to-date and accessible map through the thickets of contesting judicial opinions and their social determinants."--James W. Reed, Rutgers University