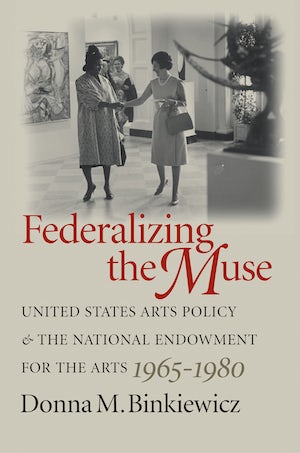 To purchase online via an independent bookstore, visit Bookshop.org
The National Endowment for the Arts is often accused of embodying a liberal agenda within the American government. In Federalizing the Muse, Donna Binkiewicz assesses the leadership and goals of Presidents Kennedy through Carter, as well as Congress and the National Council on the Arts, drawing a picture of the major players who created national arts policy. Using presidential papers, NEA and National Archives materials, and numerous interviews with policy makers, Binkiewicz refutes persisting beliefs in arts funding as part of a liberal agenda by arguing that the NEA's origins in the Cold War era colored arts policy with a distinctly moderate undertone.

Binkiewicz's study of visual arts grants reveals that NEA officials promoted a modernist, abstract aesthetic specifically because they believed such a style would best showcase American achievement and freedom. This initially led them to neglect many contemporary art forms they feared could be perceived as politically problematic, such as pop, feminist, and ethnic arts. The agency was not able to balance its funding across a variety of art forms before facing serious budget cutbacks. Binkiewicz's analysis brings important historical perspective to the perennial debates about American art policy and sheds light on provocative political and cultural issues in postwar America.

"Binkiewicz makes an excellent case for a tight relationship between the international triumph of Abstract Expressionism, the creation of the National Endowment for the Arts (NEA), and Cold War policies that valued support of the arts as a way of projecting a refined, serious image of the United States."--Journal of Cold War Studies

"Binkiewicz does an excellent job in providing the reader with a solid understanding of the political and historical context within which the NEA was created. . . . A much needed addition to the scholarship on national arts policy and more specifically on the National Endowment for the Arts."--H-Pol

"Donna Binkiewicz has written the most thorough history of the National Endowment of the Arts available. Her book traces the now-familiar 'art wars' of the last two decades back to their roots in the political landscape of the Kennedy years. By demonstrating how conceptions of artistic merit were inseparable from the larger political goals of its founders, Binkiewicz puts the lie to the notion that the agency has only recently been 'politicized.' No one writing seriously about the NEA from this point forward will be able to ignore her work."--Casey Nelson Blake, Columbia University