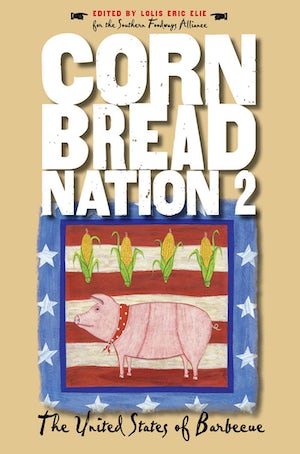 Southern barbecue and barbecue traditions are the primary focus of Cornbread Nation 2, our second collection of the best of Southern food writing. "Barbecue is the closest thing we have in the United States to Europe's wines or cheeses; drive a hundred miles and the barbecue changes," writes John Shelton Reed. Indeed, no other dish is served a dozen different ways just between Memphis and Birmingham.

In tribute to what Vince Staten calls "the slowest of the slow foods," contributors discuss the politics, sociology, and virtual religion of barbecue in the South, where communities are defined by what wood they burn, what sauce they make, and what they serve with barbecue. Jim Auchmutey links barbecue to the success of certain Southern politicians; Marcie Cohen Ferris looks at kosher brisket; and Robb Walsh investigates why black cooks have been omitted from the accepted histories of Texas barbecue, despite their seminal role in its development.

Published in association with the Southern Foodways Alliance, Center for the Study of Southern Culture, University of Mississippi

Lolis Eric Elie is a longtime columnist and food writer for the New Orleans Times-Picayune and author of Smokestack Lightning: Adventures in the Heart of Barbecue Country. He is a founding member of the Southern Foodways Alliance.
For more information about Lolis Eric Elie, visit the Author Page.

"Some of the best writing about food, barbecue in particular, that has ever been collected. These 30-some essays are mouth-watering indeed."--Baton Rouge Advocate

"An entertaining collection. . . . Its very existence--a barbeque collection from a university press--speaks volumes about the establishment of food studies."--Gastronomica

"Even the most devoted barbecue fans will find many new and surprising insights in this collection of 43 newspaper columns, magazine pieces, poems, and essays."--Southern Foodways Alliance

"Cornbread Nation 2 is a worthy successor to the first volume, edited by John Egerton, godfather of southern palates. Even those condemned by cholesterol and age to special diets can get vicarious thrills visiting southern places and dishes of misspent youth."--Union City Messenger

"A satisfying celebration of Southern cuisine and culture. . . . This is a nice compilation, and the tones and topics . . . are as varied as the barbecue styles you'd find from Texas to the Carolinas."--Publishers Weekly