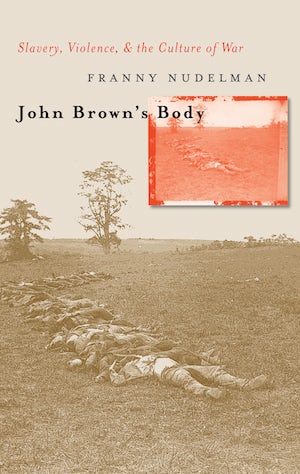 Singing "John Brown's Body" as they marched to war, Union soldiers sought to steel themselves in the face of impending death. As the bodies of these soldiers accumulated in the wake of battle, writers, artists, and politicians extolled their deaths as a means to national unity and rebirth. Many scholars have followed suit, and the Civil War is often remembered as an inaugural moment in the development of national identity.

Revisiting the culture of the Civil War, Franny Nudelman analyzes the idealization of mass death and explores alternative ways of depicting the violence of war. Considering martyred soldiers in relation to suffering slaves, she argues that responses to wartime death cannot be fully understood without attention to the brutality directed against African Americans during the antebellum era.

Throughout, Nudelman focuses not only on representations of the dead but also on practical methods for handling, studying, and commemorating corpses. She narrates heated conflicts over the political significance of the dead: whether in the anatomy classroom or the Army Medical Museum, at the military scaffold or the national cemetery, the corpse was prized as a source of authority. Integrating the study of death, oppression, and war, John Brown's Body makes an important contribution to a growing body of scholarship that meditates on the relationship between violence and culture.

Franny Nudelman is associate professor of English at Carleton University in Ottawa.
For more information about Franny Nudelman, visit the Author Page.

"Challenges us to confront the many faces of death and suffering in what was without question one of America's darkest hours."--History

"Nudelman's is an ambitious work that strives to offer an alternative interpretation of the familiar and not so familiar aspects of Civil War violence and death, and of 'the power of the dead to produce civic unity out of civil war.'"--Journal of American Studies

"A thoughtful and relevant examination of that American studies staple: found materials. . . . Nudelman's view of 'slavery, violence, and the culture of war' is a valuable contribution to American thematic study."--American Literature

"An intriguing exploration of the cultural work required by the massive destruction of the Civil War."--Drew Gilpin Faust, author of Mothers of Invention: Women of the Slaveholding South in the American Civil War