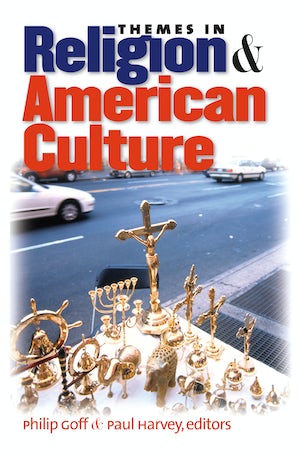 Designed to serve as an introduction to American religion, this volume is distinctive in its approach: instead of following a traditional narrative, the book is arranged thematically. Eleven chapters by top scholars present, in carefully organized and accessible fashion, topics and perspectives fundamental to the understanding of religion in America. Some of the chapters treat aspects of faith typical to most religious groups, such as theology, proselytization, supernaturalism, and cosmology. Others deal with race, ethnicity, gender, the state, economy, science, diversity, and regionalism--facets of American culture that often interact with religion.

Each topical essay is structured chronologically, divided into sections on pre-colonial, colonial, revolutionary and early republican, antebellum, postbellum and late nineteenth-century, early twentieth-century, and modern America. One can study the extended history of a certain theme, or read "across" the book for a study of all the themes during a specific period in history. This book's new approach offers a rich analysis of the genuine complexity of American religious life. With a helpful glossary of basic religious terms, movements, people, and groups, this book will become an essential tool for students and teachers of religion.

Philip Goff is director of the Center for the Study of Religion and American Culture and associate professor of religious studies and American studies at Indiana University-Purdue University at Indianapolis. He writes about American religion in the Enlightenment era and the history of religious radio.
For more information about Philip Goff, visit the Author Page.

Paul Harvey is professor of history at the University of Colorado at Colorado Springs and author of Redeeming the South: Religious Cultures and Racial Identities among Southern Baptists, 1865-1925.
For more information about Paul Harvey, visit the Author Page.

"Gracefully written. . . . This collection of essays takes a giant step."--Choice

“The study of North American religions has grown well beyond its roots as a subdiscipline of American intellectual history, and the field is now broad enough to support synthetic works that eschew chronology in favor of organizational schemes that are more compatible with the methods of scholars trained in anthropology, gender studies, literature, or sociology. For instructors seeking narrative coherence for thematic courses, this innovative, comprehensive, and provocative collection of essays may be the most important textbook on North American religions to appear in more than two decades.”--Church History

"Goff and Harvey hit upon the brilliant structural concept of organizing the book by 11 broad topics, and then chronologically within each topic, to allow students to see how a theme plays out through generations and across religions. . . . The fact that [the essays] can stand alone and be read in any order makes them ideal for classroom use or for the general reader. Overall, this primer is a breath of fresh air; it maintains the integrity of the overall story while giving due attention to its various parts."--Publishers Weekly

"General readers with an interest in U.S. culture and politics will find an engaging set of perspectives on the relationship between religion and race, gender, ethnicity, government, and science. . . . What keeps this book accessible and engaging is the editing approach. . . . College students of religion or of American history will be fortunate if their professors choose Themes in Religion and American Culture. They will find lucid insight into the history of religion in the United States. And anyone else seeking to understand the too-often politicized culture of religion will find clarity, which is the true gift of history."--Indianapolis Star

"This textbook, which enlists some of the best and brightest scholars of the younger generation, synthesizes the latest developments in the field in a series of thematic essays. It provides a major alternative to textbooks organized chronologically or by traditions and should definitely find a place in undergraduate courses on American religious history."--Ann Taves, Claremont School of Theology