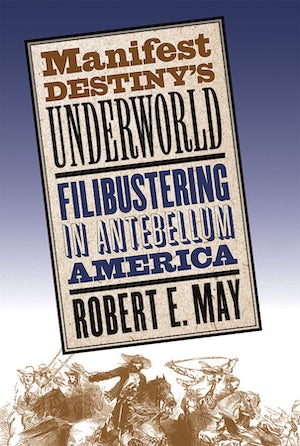 This fascinating study sheds new light on antebellum America's notorious "filibusters"--the freebooters and adventurers who organized or participated in armed invasions of nations with whom the United States was formally at peace. Offering the first full-scale analysis of the filibustering movement, Robert May relates the often-tragic stories of illegal expeditions into Cuba, Mexico, Ecuador, Nicaragua, and other Latin American countries and details surprising numbers of aborted plots, as well.

May investigates why thousands of men joined filibustering expeditions, how they were financed, and why the U.S. government had little success in curtailing them. Surveying antebellum popular media, he shows how the filibustering phenomenon infiltrated the American psyche in newspapers, theater, music, advertising, and literature. Condemned abroad as pirates, frequently in language strikingly similar to modern American denunciations of foreign terrorists, the filibusters were often celebrated at home as heroes who epitomized the spirit of Manifest Destiny.

May concludes by exploring the national consequences of filibustering, arguing that the practice inflicted lasting damage on U.S. relations with foreign countries and contributed to the North-South division over slavery that culminated in the Civil War.

Robert E. May is professor of history at Purdue University in West Lafayette, Indiana. His previous books include The Union, the Confederacy, and the Atlantic Rim and the prize-winning John A. Quitman: Old South Crusader.
For more information about Robert E. May, visit the Author Page.

"May has produced his magnum opus. . . . Unquestionably the finest volume yet written on the subject of filibustering."--Civil War History

"This, of course, is Robert E. May's essential point: the filibusters, who had a critical impact on contemporary American culture and politics, have largely vanished from our historical memory. . . . No one has heretofore synthesized the filibusterers' activities and analyzed who served, their motivation, ideology, funding, and role in the broader milieu. The author thus provides not only an overview of major and minor expeditions but also a colorful and interesting look at their identities and the consequences of their actions. . . . May has provided a major contribution toward our understanding of the 'underworld' of filibustering."--American Historical Review

"In this balanced, judicious, and readable account of U.S. filibustering from the 1820s to the 1860s, Robert E. May . . . redesigns the study of filibustering. . . . [An] impressive book."--Journal of Southern History

"Exhaustively researched and comprehensive in scope, Manifest Destiny's Underworld is the first book successfully to integrate filibustering into the antebellum American experience. Equally important, the book will be of immense value to scholars interested in the larger, geopolitical role that the United States played during the nineteenth century. As such, it serves as a telling reminder that American aggression against hemispheric neighbors has had a long history, one that predates the emergence of the United States as a world power."--Military History of the West

"[Manifest Destiny's Underworld: Filibustering in Antebellum America] is an important and well-written book that restores to its proper place a little known but significant topic in American history."--Manhattan Journal of the West