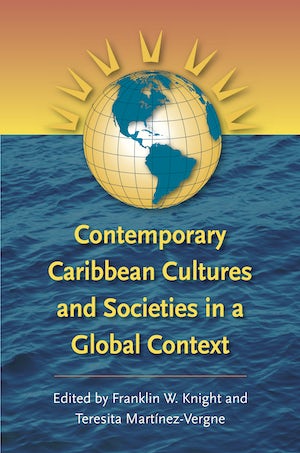 The Caribbean ranks among the earliest and most completely globalized regions in the world. From the first moment Europeans set foot on the islands to the present, products, people, and ideas have made their way back and forth between the region and other parts of the globe with unequal but inexorable force. An inventory of some of these unprecedented multidirectional exchanges, this volume provides a measure of, as well as a model for, new scholarship on globalization in the region.

Ten essays by leading scholars in the field of Caribbean studies identify and illuminate important social and cultural aspects of the region as it seeks to maintain its own identity against the unrelenting pressures of globalization. These essays examine cultural phenomena in their creolized forms--from sports and religion to music and drink--as well as the Caribbean manifestations of more universal trends--from racial inequality and feminist activism to indebtedness and economic uncertainty. Throughout, the volume points to the contending forces of homogeneity and differentiation that define globalization and highlights the growing agency of the Caribbean peoples in the modern world.

Franklin W. Knight is Leonard and Helen R. Stulman Professor of History at The Johns Hopkins University. He has written, edited, or coedited nine books, including The Modern Caribbean.
For more information about Franklin W. Knight, visit the Author Page.

"A wide-ranging overview of the challenges facing the region today. . . . A welcome assessment of the positive action that is being taken by Caribbean people to reassert their place within a globalizing world."--The Round Table

"Offers many ways to approach contemporary globalization, especially as it is experienced by insular societies with limited natural resources."--New West Indian Guide

"The most rewarding aspect of these volumes is that their divergence in orientation raises important questions about the ways we interpret the Caribbean."--Caribbean Studies

“Taking the view that globalization is not a modern phenomenon but rather began when Europeans set sail in the late 1400s, the various authors [in this collection] attempt to show that the Caribbean is shaped by both local and external processes and, particularly, in modern times, dialectical interactions with their diaspora in Europe and North America. . . . A good collection of works.”--H-Caribbean

"This splendidly eclectic collection of essays on the contemporary Caribbean reveals the fascinating diversity of the region's cultures as they respond to--and help to shape--the pressures of globalization. The cultural resilience and dynamic creativity of the Caribbean peoples are evoked in interesting, perceptive, and often surprising ways in this highly original book."--Bridget Brereton, University of the West Indies