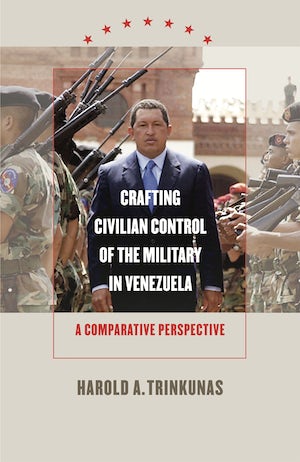 Unlike most other emerging South American democracies, Venezuela has not succumbed to a successful military coup d'état during four decades of democratic rule. What drives armed forces to follow the orders of elected leaders? And how do emerging democracies gain that control over their military establishments? Harold Trinkunas answers these questions in an examination of Venezuela's transition to democracy following military rule and its attempts to institutionalize civilian control of the military over the past sixty years, a period that included three regime changes.

Trinkunas first focuses on the strategic choices democratizers make about the military and how these affect the internal civil-military balance of power in a new regime. He then analyzes a regime's capacity to institutionalize civilian control, looking specifically at Venezuela's failures and successes in this arena during three periods of intense change: the October revolution (1945-48), the Pact of Punto Fijo period (1958-98), and the Fifth Republic under President Hugo Chávez (1998 to the present). Placing Venezuela in comparative perspective with Argentina, Chile, and Spain, Trinkunas identifies the bureaucratic mechanisms democracies need in order to sustain civilian authority over the armed forces.

"Students and policy makers will applaud the arrival of this splendid book. . . . The book should have a prominent place in Latin American courses and should be mined for policy wisdom in every capital in the hemisphere."--Americas

"This book makes excellent reading for scholars interested in Venezuelan politics, civil-military relations in new and fragile democracies, and democratic transitions and deconsolidations. It is excellently written and organized."--Latin American Politics and Society

"[Crafting Civilian Control of the Military in Venezuela] contributes substantially to the general discussion of how to establish civilian control over the armed forces. Perhaps most important is Trinkunas's emphasis on the importance of competent civilian control over such critical areas as military organization and roles."--Political Science Quarterly

"Venezuela is a very important case for the study of the connections between civilian control and democracy: it often has gone in directions different from most countries in the region and, in the past six decades, has displayed significant variation in civil-military relations. Trinkunas fills an important gap by addressing this case insightfully, with a fresh look and a new concept."--Felipe Agüero, University of Miami

"Trinkunas significantly advances our understanding of Venezuelan democracy through a sophisticated and absorbing analysis of that nation's civil-military relations. With theory as his guide, he demonstrates how politicians' strategic choices about the military have had lasting consequences for Venezuela's entire political system."--David Pion-Berlin, University of California, Riverside