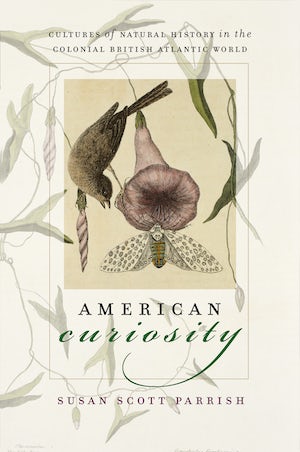 Colonial America presented a new world of natural curiosities for settlers as well as the London-based scientific community. In American Curiosity, Susan Scott Parrish examines how various peoples in the British colonies understood and represented the natural world around them from the late sixteenth century through the eighteenth. Parrish shows how scientific knowledge about America, rather than flowing strictly from metropole to colony, emerged from a horizontal exchange of information across the Atlantic.

Delving into an understudied archive of letters, Parrish uncovers early descriptions of American natural phenomena as well as clues to how people in the colonies construed their own identities through the natural world. Although hierarchies of gender, class, institutional learning, place of birth or residence, and race persisted within the natural history community, the contributions of any participant were considered valuable as long as they supplied novel data or specimens from the American side of the Atlantic. Thus Anglo-American nonelites, women, Indians, and enslaved Africans all played crucial roles in gathering and relaying new information to Europe.

Recognizing a significant tradition of nature writing and representation in North America well before the Transcendentalists, American Curiosity also enlarges our notions of the scientific Enlightenment by looking beyond European centers to find a socially inclusive American base to a true transatlantic expansion of knowledge.

"A richly detailed account of the various practices and participants involved in the production of natural history knowledge in the colonial British Atlantic world."--Journal of the History of Science

"Full of fascinating moments and of telling intersections."--American Historical Review

"A treasure trove of visual and written sources. . . . A fresh and valuable addition to the field. . . . Offer[s] an authoritative study which will appeal to scholars working in a wide range of disciplines."--Journal of American Studies

"[Advances] historical understanding of colonial natural history in ways that specialists have demanded but not pursued, and will force them to rethink the categories they employ."--Journal of the Early Republic

"A major contribution to many fields . . . should appeal to an interdisciplinary audience."--New England Quarterly