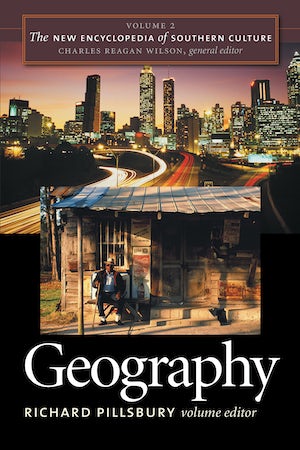 To purchase online via an independent bookstore, visit Bookshop.org
The location of "the South" is hardly a settled or static geographic concept. Culturally speaking, are Florida and Arkansas really part of the same region? Is Texas considered part of the South or the West? This volume of The New Encyclopedia of Southern Culture grapples with the contestable issue of where the cultural South is located, both on maps and in the minds of Americans.

Richard Pillsbury's introductory essay explores the evolution of geographic patterns of life within the region--agricultural practices, urban patterns, residential buildings, religious preferences, foodways, and language. The entries that follow address general topics of cultural geographic interest, such as Appalachia, exiles and expatriates, Latino and Jewish populations, migration patterns, and the profound Disneyfication of central Florida. Entries with a more concentrated focus examine major cities, such as Atlanta, New Orleans, and Memphis; the influence of black and white southern migrants on northern cities; and individual subregions, such as the Piedmont, Piney Woods, Tidewater, and Delta. Putting together the disparate pieces that make up the place called "the South," this volume sets the scene for the discussions in all the other volumes of The New Encyclopedia of Southern Culture.

Richard Pillsbury is professor emeritus of geography at Georgia State University and author or coauthor of five books, including Atlas of American Agriculture: The American Cornucopia. Charles Reagan Wilson is director of the Center for the Study of Southern Culture at the University of Mississippi and coeditor of the original Encyclopedia of Southern Culture.
For more information about Richard Pillsbury, visit the Author Page.

“This set represents a solid improvement on a celebrated work. The individual volumes will be essential for scholars of various Southern studies topics.”--Library Journal

"If you are a southerner and have ever wondered why you do the things you do, why you eat the foods you eat or talk the way you talk, why the trees grow the way they grow, and even the weeds in your yard, then you need The New Encyclopedia of Southern Culture. If you don't have an old person to pass it down to you firsthand, this might be the next best thing."--Rick Bragg

"A comprehensive read and simply fascinating browse."--Jack Temple Kirby, author of Poquosin: A Study of Rural Landscape and Society