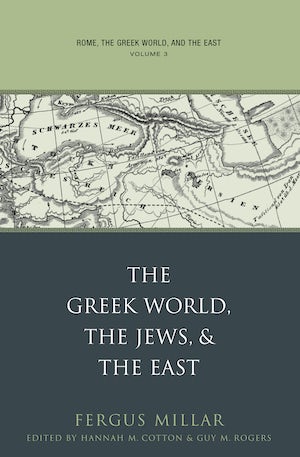 This volume completes the three-volume collection of Fergus Millar's essays, which, together with his books, transformed the study of the Roman Empire by shifting the focus of inquiry onto the broader Mediterranean world and beyond. The eighteen essays presented here include Millar's classic contributions to our understanding of the impact of Rome on the peoples, cultures, and religions of the eastern Mediterranean, and the extent to which Graeco-Roman culture acted as a vehicle for the self-expression of the indigenous cultures. In an epilogue written to conclude the collection, Millar argues for rethinking the focus of "ancient history" itself and for considering the Levant and the eastern Mediterranean from the first millennium B.C. to the Islamic conquests a valid scholarly framework and an appropriate educational syllabus for the study of antiquity. English translations of extended ancient passages in Greek, Latin, and Semitic languages in all the essays make Millar's most important articles accessible for the first time to specialists and nonspecialists alike.

"[Millar's] principal suggestion is that we are now in a position to counterbalance the dominant role of traditional ancient history with its focus on the Western half of the Mediterranean world. The book as a whole shows that M[illar] has already embarked on the process of redrawing the map."--Ancient History

"Stunning. . . . The product of a magnificent mind."--Bryn Mawr Classical Review

"Those who have learned much from [Millar] will be delighted with this volume, and will find much to stimulate new avenues of exploration. . . . The book belongs in every library used by those studying the classical, Jewish and Christian sources and world."--Journal of Jewish Studies

"What makes Fergus Millar a great historian? Two things: first, he has wide vision, the ability to discern forests and not just trees, to see the grand picture. Second, he has a command of the telling detail. He is an empiricist, at his best when collecting inscriptions and other material evidence; in his hands these scraps and fragments, both collectively and individually, reveal the workings of society and culture. This third volume is a worthy successor and partner to the two volumes of Millar's essays that have already appeared. The scholarly world should be grateful to have the collected articles of Fergus Millar."--Shaye J. D. Cohen, Harvard University