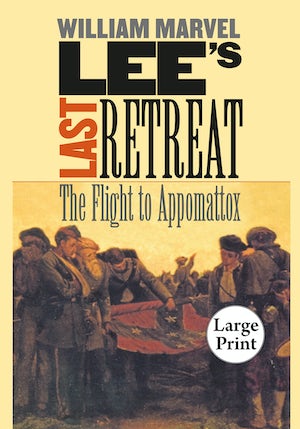 Few events in Civil War history have generated such deliberate mythmaking as the retreat that ended at Appomattox. William Marvel offers the first history of the Appomattox campaign written primarily from contemporary source material, with a skeptical eye toward memoirs published well after the events they purport to describe.

Marvel shows that during the final week of the war in Virginia, Lee's troops were more numerous yet far less faithful to their cause than has been suggested. He also proves accounts of the congenial intermingling of the armies at Appomattox to be shamelessly overblown and the renowned exchange of salutes to be apocryphal.

William Marvel's many books include A Place Called Appomattox, Andersonville: The Last Depot, and The Alabama and the Kearsarge: The Sailor's Civil War, all published by The University of North Carolina Press. He lives in South Conway, New Hampshire.
For more information about William Marvel, visit the Author Page.

"A worthwhile and solidly researched history that broadens our understanding of what happened during Lee's final, disastrous retreat."--Civil War News

"Contradicting popular belief that Robert E. Lee's Army of Northern Virginia was defeated because it was vastly outnumbered, out-equipped, and out-fed, Marvel sets the record straight on the last retreat and surrender of the Confederate army."--Library Journal

"Marvel has cut away much distortion and hyperbole from the Appomattox story."--Washington Times

"This book establishes a new baseline for discussions about Lee's last campaign."--Journal of Southern History

"This well-written study challenges numerous popular myths about the final days of the Army of Northern Virginia. . . . Stands as the best single-volume study to date on the Appomattox Campaign."--Blue & Gray Magazine