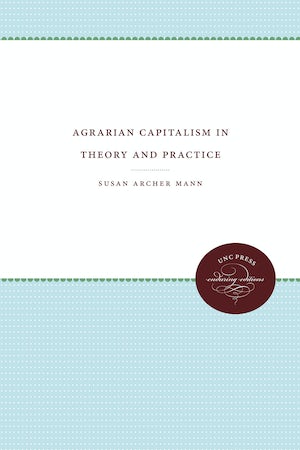 To purchase online via an independent bookstore, visit Bookshop.org
Susan Mann focuses on a longstanding controversy in sociological theory: why has agriculture been traditionally resistant to wage labor? Capitalist develoment has been slower and more uneven in agriculture than in other spheres of production, and major parts of the rural economy remain almost preindustrial in their reliance on family labor, lack of separation between industry and household, and failure to develop a highly specialized division of labor. Emphasizing the agriculture of the American South, Mann adopts an interdisciplinary approach, drawing insights from history and economics as well as sociology.

Mann points out that most theories of agrarian capitalism -- both Marxist and non-Marxist -- ignore the implications of agriculture as a production process centered in nature, with natural features that cannot be synchronized easily into the tempos required by industrial production. She argues that various natural and technical features of agricultural production, such as the relatively lengthy production time of certain crops and the irregular labor requirements imposed by seasonal production, make some types of farming particularly risky avenues for capitalist investment.

To test this pioneering theory of natural obstacles to rural capitalist development, Mann creatively combines diverse research methodologies. Analyzing U.S. Agricultural Census data, she shows the correlations between type of agricultural commodity or crop produced, the natural and technical features of these rural commodities, and the use of wage labor. Using an historical-comparative approach, she investigates the persistence of nonwage labor in American cotton production after the Civil War. She examines why sharecropping, rather than wage labor, replaced slavery in the older cotton-producing regions of the southeastern United States. She then discusses the domestic and international factors that finally led to the demise of sharecropping and the rise of wage labor in the decades following the Great Depression.

In this historical study of the rise and demise of sharecropping, the interplay between nature, gender, race, and class is highlighted. By closely examining both natural and social obstacles to wage labor within the context of a global economy, Mann presents not only an intriguing analysis of agrarian capitalist development but also an entirely new framework for examining the social history of the American South.

"The most wide-ranging effort to date to locate a theory of agrarian structure and change in the principles of classical Marxism and contemporary neo-Marxist thought and in the problematics of recent theory in the sociology of development, sociology of gender and the family, and economic sociology. Mann elaborates on the well-known Mann-Dickinson thesis concerning the obstacles to the development of capitalist agriculture and subjects the thesis to a variety of creative empirical tests. In particular, Mann's book will stand as one of the most provocative theoretical and empirical syntheses of the vast scholarship on the southern plantation economy."--Frederick H. Buttel, Cornell University

"Mann has crafted an original and sophisticated theoretical framework for the analysis of agricultural production and rural society. Not satisfied to simply reiterate her substantial contributions to the 'new sociology of agriculture,' Mann challenges many of that field's core assumptions by skillfully traversing disciplinary boundaries to harvest fresh insights from history, economics, and a variety of subfields in sociology. Precisely because it refuses to be hemmed in by either a 'commodity' focus or worn-out distinctions between rural and urban, this book deserves close examination by sociologists, economists, and historians struggling to understand the dynamics of uneven development and the persistence of non-wage production systems."--Robert J. Thomas, Massachusetts Institute of Technology