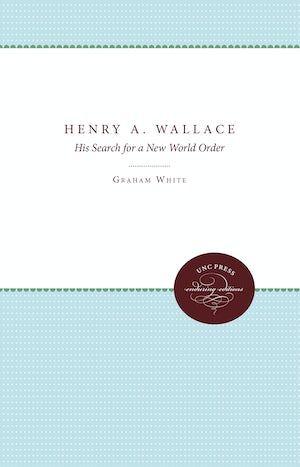 Henry A. Wallace (1888-1965) remains one of the most puzzling figures of twentieth-century American politics. Serving as secretary of agriculture during the Great Depression, as vice president from 1941 to 1945, and advocating accommodation with the Soviet Union as the Progressive Party's candidate for president in 1948, Wallace had embarked on a spiritual odyssey that shaped his quest for world peace. In this interpretive biography, Graham White and John Maze explore Wallace's political career, his enigmatic personality, and the origins and development of his social, political, and religious thought, including his mystical beliefs. According to White and Maze, an eclectic spiritualism and its attendant social attitudes were central to Wallace's political goals and the course of his public life. Wallace hoped that through free trade, shared technological development, and international economic cooperation, inequity and greed would be made obsolete. Drawing extensively on Wallace's personal papers, his political diary, and his 5,000-page memoir, this study sheds new light not only on Wallace himself, but also on the Roosevelt administration in which he served.

Graham White is senior lecturer in history at the University of Sydney in Australia. He is author of FDR and the Press.
For more information about Graham White, visit the Author Page.

John Maze is an independent scholar who has taught psychology at the University of Sydney. He is author of The Meaning of Behaviour.
For more information about John Maze, visit the Author Page.

"A rare examination of the life, accomplishments, and intellectual roots of an extraordinary though neglected figure."--Kirkus Reviews

"A revealing political biography of a major 20th-century politician."--Choice

"The best serious treatment of Wallace and his role in United States history in a generation. . . . A major contribution to understanding both Wallace and his larger relationship to the world of New Deal politics and thought."--Journal of American History