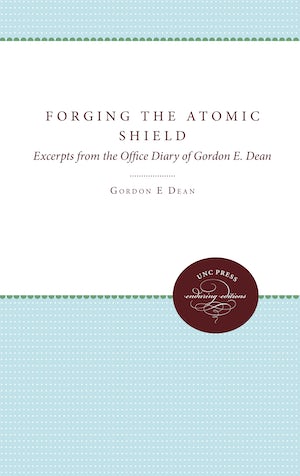 1988 Henry Adams Prize, Society for History in the Federal Government

Soon after his appointment as chairman of the U.S. Atomic Energy Commission in 1950, Gordon E. Dean began an office diary composed primarily of notes from his telephone conversations. The diary contains Dean's accounts of the mobilization of atomic energy for the Korean War, the decision to conduct atmospheric nuclear weapons tests in the U.S., the development and testing of the first thermonuclear device, the decisions to erect vast plants for the production of atomic weapons, the Rosenberg atom spy case, and other critical issues.

"A scrupulously edited contemporary record of Gordon Dean's work as member and then chairman of the AEC, 1950- 53. It sheds new light on such great events as the decision to build the H-bomb, the transfer of weapons to military custody, and the decisions of 1951-52 for vast expansion of weapon-making capacity."--McGeorge Bundy