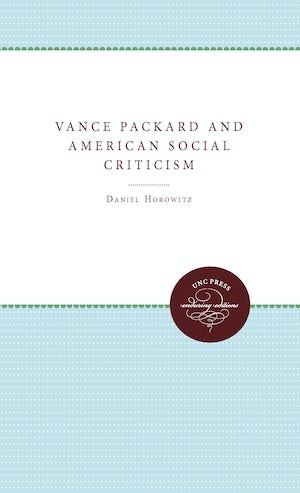 Vance Packard's bestselling books--Hidden Persuaders (1957), Status Seekers (1959), and Waste Makers (1960)--taught the generation that came of age in the late 1950s and early 1960s about the dangers posed by advertising, social climbing, and planned obsolescence. Like Betty Friedan and William H. Whyte, Jr., Packard (1914- ) was a journalist who played an important role in the nation's transition from the largely complacent 1950s to the tumultuous 1960s. He was also one of the first social critics to benefit from and foster the newly energized social and political consciousness of this period. Based in part on interviews with Packard, Daniel Horowitz's intellectual biography focuses on the period during which Packard left magazine writing to author his most famous works of social criticism. Horowitz traces the influence of Packard's education and early years in rural Pennsylvania, providing a deeper understanding of his thought and his later books. Packard's life, Horowitz contends, illuminates the dilemmas of a freelance social critic without inherited wealth or academic affiliation. His career also expands our understanding of how one era shaped the next, underscoring how the adversarial 1960s drew on the mass culture of the previous decade.

Daniel Horowitz, professor of American studies and history at Smith College, is author of The Morality of Spending: Attitudes Toward the Consumer Society in America, 1875-1940.
For more information about Daniel Horowitz, visit the Author Page.

"[Horowitz] offers a wealth of insight into twentieth-century journalism, homegrown American liberalism, and the role of the popular intellectual."--American Historical Review

"Drawing extensively on Packard's writings and supplementing them with personal interviews, Horowitz has produced a first-rate biography that neither romanticizes nor diminishes his subject. . . . The reader is treated to a balanced, thoroughly researched and thoughtful biography."--Journal of Social History

"Vance Packard and American Social Criticism combines a perceptive intellectual biography with an evocative exploration of larger issues in American life over the twentieth century. It is a model study."--Journal of American History

"A graceful, probing biography of a famous critic of consumption, affluence, and American life. . . . Combines a perceptive intellectual biography with an evocative exploration of larger issues in American life over the twentieth century. A model study."--Journal of American History

"I learned from Vance Packard that a journalist who could not get articles published that defied the conventional wisdom could write a book. . . . Packard's classics--Hidden Persuaders, Status Seekers, and Waste Makers--demonstrated how a writer working from personal truth and social observation could foster a public awakening as Americans put the 1950s behind them and entered the 1960s. In Vance Packard and American Social Criticism, Daniel Horowitz has captured the drama and importance of Packard's pioneering work."--Betty Friedan, author of The Feminine Mystique