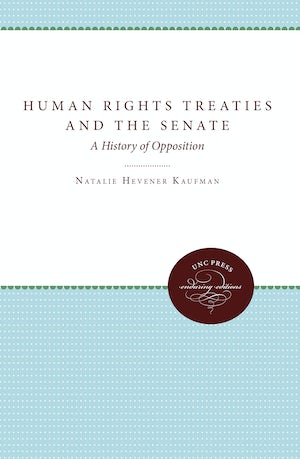 The US has declined to approve most human rights treaties, despite widespread support for such treaties among other Western democracies. This study explores the legacy of the 1950s, when opposition to the treaties was articulated, and the residual strength of that opposition in contemporary deliberations.

"Why has the U.S. Senate been so notoriously unwilling to ratify human rights treaties? Natalie Hevener Kaufman shows that from the beginning, the treaties' opponents captured the terms of debate. Support for the treaties was betrayal of the Constitution; ingenuous supporters never had a chance. Kaufman lets the principals speak for themselves. Her skillful assembly of so many telling quotations makes this the definitive study of an episode in American public life as tawdry as it is drawn out."--Nicholas Onuf, American University

"Professor Kaufman combines in her book a most thorough historical research with a meticulous analysis of the arguments of a group of Senators, who--starting with Senator Bricker in the 1950s--have waged over the years a successful battle against United States ratification of United Nations human rights treaties."--Louis B. Sohn, University of Georgia, School of Law

"This fascinating, detailed study explains how a determined group of conservative, McCarthyite lawyers and senators managed to establish in the late 1940s and 1950s a climate of American distrust of international human rights treaties. . . . [Kaufman] has excellent credentials; her book is certain to remain the standard work in the area for many years."--Choice