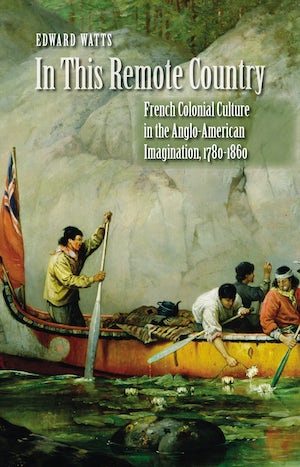 When Anglo-Americans looked west after the Revolution, they hoped to see a blank slate upon which to build their continental republic. However, French settlers had inhabited the territory stretching from Ohio to Oregon for over a century, blending into Native American networks, economies, and communities. Images of these French settlers saturated nearly every American text concerned with the West. Edward Watts argues that these representations of French colonial culture played a significant role in developing the identity of the new nation.

In regard to land, labor, gender, family, race, and religion, American interpretations of the French frontier became a means of sorting the empire builders from those with a more moderate and contained nation in mind, says Watts. Romantic nationalists such as George Bancroft, Francis Parkman, and Lyman Beecher used the French model to justify the construction of a nascent empire. Alternatively, writers such as Margaret Fuller, Henry Wadsworth Longfellow, and James Hall presented a less aggressive vision of the nation based on the colonial French themselves. By examining how representations of the French shaped these conversations, Watts offers an alternative view of antebellum culture wars.

Edward Watts is professor of English at Michigan State University. He is author or coeditor of four books, including An American Colony: Regionalism and the Roots of Midwestern Culture.
For more information about Edward Watts, visit the Author Page.

"Beautifully written and rich both in original research and in cogent critiques of U.S. imperialist ideology."--Modern Philology

"A remarkable contribution. It deserves a wide readership among scholars of nineteenth-century literature and historians."--Michigan Historical Review

"An important book going well beyond its subtitle. . . . Valuable . . . [a] nuanced reading of contemporary literary and historical texts."--Journal of the West

"Packed with many stimulating insights. . . . Watts has something important to say to a very wide audience. . . A powerful argument about the importance of colonial representations in a postcolonial world."--Journal of Colonialism and Colonial History

"[An] intriguing book. . . . A remarkable array of nineteenth-century sources. . . . An especially rich analysis."--Indiana Magazine of History

"A major contribution to contemporary scholarship. . . . A fascinating and authoritative study."--Journal of American Studies