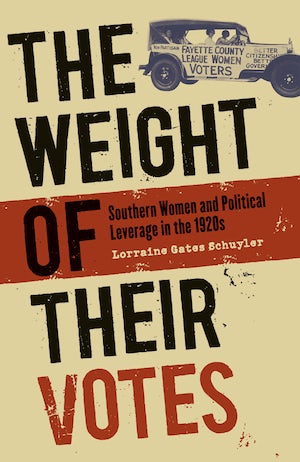 After the ratification of the Nineteenth Amendment in 1920, hundreds of thousands of southern women went to the polls for the first time. In The Weight of Their Votes Lorraine Gates Schuyler examines the consequences this had in states across the South. She shows that from polling places to the halls of state legislatures, women altered the political landscape in ways both symbolic and substantive. Schuyler challenges popular scholarly opinion that women failed to wield their ballots effectively in the 1920s, arguing instead that in state and local politics, women made the most of their votes.

Schuyler explores get-out-the-vote campaigns staged by black and white women in the region and the response of white politicians to the sudden expansion of the electorate. Despite the cultural expectations of southern womanhood and the obstacles of poll taxes, literacy tests, and other suffrage restrictions, southern women took advantage of their voting power, Schuyler shows. Black women mobilized to challenge disfranchisement and seize their right to vote. White women lobbied state legislators for policy changes and threatened their representatives with political defeat if they failed to heed women's policy demands. Thus, even as southern Democrats remained in power, the social welfare policies and public spending priorities of southern states changed in the 1920s as a consequence of woman suffrage.

"A superb and engaging book of historiographical significance."--American Historical Review

"Debunk[s] the argument that the political power of women lost potency after they received the vote."--Journal of Southern History

"Presents a highly original and convincing look at the contested right to vote."--Virginia Quarterly Review

"Should be widely read, not only by historians of southern women but also by scholars of southern politics. Clearly written and deeply researched, it should help redirect our attention to this much-neglected history of southern women after enfranchisement and challenge us to think more critically about the nature of women's political activism in the 1920s."--North Carolina Historical Review

"Offers a new perspective on key historical questions, and this influential study should guide many future projects."--The American Journal of Legal History