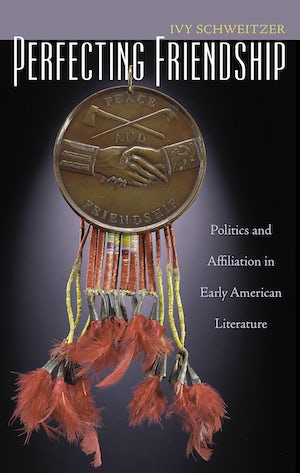 To purchase online via an independent bookstore, visit Bookshop.org
Contemporary notions of friendship regularly place it in the private sphere, associated with feminized forms of sympathy and affection. As Ivy Schweitzer explains, however, this perception leads to a misunderstanding of American history. In an exploration of early American literature and culture, Schweitzer uncovers friendships built on a classical model that is both public and political in nature.

Schweitzer begins with Aristotle's ideal of "perfect" friendship that positions freely chosen relationships among equals as the highest realization of ethical, social, and political bonds. Evidence in works by John Winthrop, Hannah Foster, James Fenimore Cooper, and Catharine Sedgwick confirms that this classical model shaped early American concepts of friendship and, thus, democracy. Schweitzer argues that recognizing the centrality of friendship as a cultural institution is critical to understanding the rationales for consolidating power among white males in the young nation. She also demonstrates how women, nonelite groups, and minorities have appropriated and redefined the discourse of perfect friendship, making equality its result rather than its requirement. By recovering the public nature of friendship, Schweitzer establishes discourse about affection and affiliation as a central component of American identity and democratic community.

Ivy Schweitzer is professor of English at Dartmouth College. She is author and coeditor of three other books, including The Work of Self-Representation: Lyric Poetry in Colonial New England (from the University of North Carolina Press).
For more information about Ivy Schweitzer, visit the Author Page.

"A brilliant exercise in analysis."--Journal of American History

"Schweitzer's innovative look at a history of alternative versions of affiliation is intriguing and provocative, opening new possibilities for thinking about the way in which affiliation operates in institutionalized and deinstitutionalized ways to shape culture and politics."--Elizabeth M. Dillon, Yale University

“Extensively researched, this timely contribution to a field now welcoming new energy and insights adds an important dimension to our understanding of the figure of friendship in colonial American literature.”--Leonard Tennenhouse, Brown University