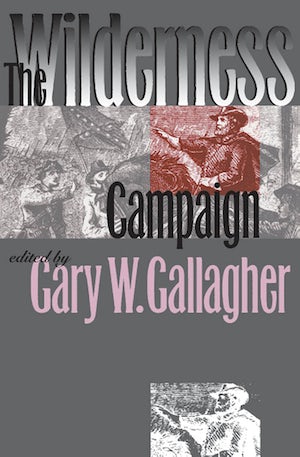 In the spring of 1864, in the vast Virginia scrub forest known as the Wilderness, Ulysses S. Grant and Robert E. Lee first met in battle. The Wilderness campaign of May 5-6 initiated an epic confrontation between these two Civil War commanders--one that would finally end, eleven months later, with Lee's surrender at Appomattox.

The eight essays here assembled explore aspects of the background, conduct, and repercussions of the fighting in the Wilderness. Through an often-revisionist lens, contributors to this volume focus on topics such as civilian expectations for the campaign, morale in the two armies, and the generalship of Lee, Grant, Philip H. Sheridan, Richard S. Ewell, A. P. Hill, James Longstreet, and Lewis A. Grant. Taken together, these essays revise and enhance existing work on the battle, highlighting ways in which the military and nonmilitary spheres of war intersected in the Wilderness.

--Peter S. Carmichael, 'Escaping the Shadow of Gettysburg: Richard S. Ewell and Ambrose Powell Hill at the Wilderness' --Gary W. Gallagher, 'Our Hearts Are Full of Hope: The Army of Northern Virginia in the Spring of 1864' --John J. Hennessy, 'I Dread the Spring: The Army of the Potomac Prepares for the Overland Campaign' --Robert E. L. Krick, 'Like a Duck on a June Bug: James Longstreet's Flank Attack, May 6, 1864' --Robert K. Krick, ''Lee to the Rear,' the Texans Cried' --Carol Reardon, 'The Other Grant: Lewis A. Grant and the Vermont Brigade in the Battle of the Wilderness' --Gordon C. Rhea, 'Union Cavalry in the Wilderness: The Education of Philip H. Sheridan and James H. Wilson' --Brooks D. Simpson, 'Great Expectations: Ulysses S. Grant, the Northern Press, and the Opening of the Wilderness Campaign'

Gary W. Gallagher is John L. Nau III Professor of History at the University of Virginia. He has written or edited two dozen books in the field of Civil War history, including The Shenandoah Valley Campaign of 1864 and Lee and His Army in Confederate History (both from the University of North Carolina Press).
For more information about Gary W. Gallagher, visit the Author Page.

"Those interested in the Wilderness campaign, or in the Civil War in general, will find much of interest here."--Military History of the West

“This book offers detailed, in-depth analyses of key events or overlooked aspects of an important campaign. . . . A useful and interesting addition to our knowledge of one of the Civil War’s most dramatic battles.”--Journal of Southern History

"Thought provoking and thoroughly researched essays, each dealing with a different aspect of the Wilderness Campaign. . . . This book is an excellent addition to the Civil War student's shelf."--Blue & Gray Magazine

"Well conceived and well presented. . . . The eight essays in no way presume to be the full story of the Wilderness fighting, but the full story can never be gained without consulting this work."--Richmond Times Dispatch

"An important contribution to our understanding of this complex campaign."--The Free Lance-Star (Fredericksburg, Va.)

"Overall, these essays offer insights and details about aspects of the Wilderness battle that tend to intrigue and enlighten the serious student of the Civil War, and it is to Gallagher's credit that he fostered this book."--H-Net Reviews