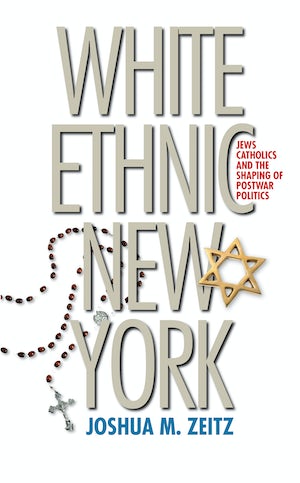 Historians of postwar American politics often identify race as a driving force in the dynamically shifting political culture. Joshua Zeitz instead places religion and ethnicity at the fore, arguing that ethnic conflict among Irish Catholics, Italian Catholics, and Jews in New York City had a decisive impact on the shape of liberal politics long before black-white racial identity politics entered the political lexicon.

Understanding ethnicity as an intersection of class, national origins, and religion, Zeitz demonstrates that the white ethnic populations of New York had significantly diverging views on authority and dissent, community and individuality, secularism and spirituality, and obligation and entitlement. New York Jews came from Eastern European traditions that valued dissent and encouraged political agitation; their Irish and Italian Catholic neighbors tended to value commitment to order, deference to authority, and allegiance to church and community. Zeitz argues that these distinctions ultimately helped fracture the liberal coalition of the Roosevelt era, as many Catholics bolted a Democratic Party increasingly focused on individual liberties, and many dissent-minded Jews moved on to the antiliberal New Left.

Joshua M. Zeitz is lecturer in history at Pembroke College, University of Cambridge. He is author of Flapper: A Madcap Story of Sex, Style, Celebrity, and the Women Who Made America Modern.
For more information about Joshua M. Zeitz, visit the Author Page.

"New York's liberal coalition was arguably the strongest in the country, but as Joshua Zeitz shows in White Ethnic New York, his fine new book on Catholic and Jewish politics in New York City, that coalition was fragile, even in its postwar heyday."--The Nation

"Valuable for students of ethnic politics."--Journal of American History

"A complex yet intriguing story. . . . Almost every critical reader will be surprised."--Journal of American Ethnic History

"An interesting and, at times, trenchant account of ethnic relations after the war."--The Journal of Interdisciplinary History

"A valuable contribution to the study of the ethnic and religious experience in New York."--Catholic Historical Review